I was running late for a lunch meeting today and had been trying in vain to flag down a cab. Lunch time is definitely not the best time to catch a cab given that most people would have called for one. It was so warm and humid too. A lady (I presumed she was a staff since she had our company pass ard her neck) walked right beside me..and after waiting there a while, she crossed the road and tried flagging a cab which was coming from the other direction. I was damn pissed! The place where I was standing was the unofficial waiting place for cabs since it was right at the cross junction and we could catch the cabs coming from both directions. We would usually form our own queue there and wait in line. She definitely knew the sop..and there she was trying to potong! I knew the cab would not stop for her since it's 'for hire' sign was off. Not only was she inconsiderate, she was visually impaired too. Then I spied a cab coming by from a distance and I simply didn't want her to 'win'. I quickly walked a little further where I was directly opposite her, and said to her "Excuse me? Are you blind? Couldn't you see that I was waiting for a cab too? "The lady stared at me blankly for a while. I think she was surprised that i had the nerve to confront her. And then she just turned tail and walked away... I then jumped into the cab that stopped right in front of me.

Hrmphh....! Hubby had remarked that I'm sometimes too quick-tempered and act without thinking.. But I'll have no qualms about telling someone off when I'm really cross. Especially at the theatres. I've scolded several people for talking non-stop on their mobile during the movie! Hubby said that I'm gonna kena bashed up one of these days :P 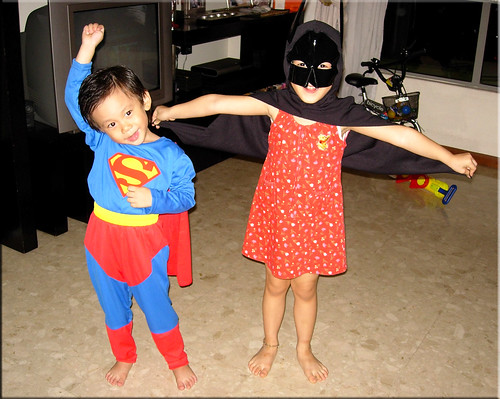 I'll need my superheros to come to my rescue then~!
Collapse