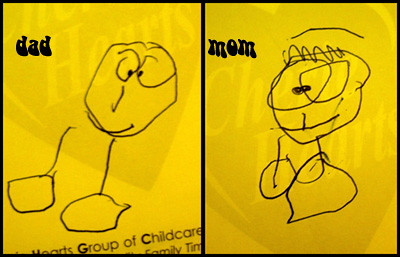 Guess it's safe to say that my boy has inherited my uncreative genes..*sob* But I do see some resemblance of hubby in that drawing of his dad :P We look like potatoes though..

And just a few days ago, I overheard him singing to himself and the tune sounded familiar.. So I snuck up closer to him and then I heard..!

*Face palm*..He has inherited my [awful] taste in music too :P I probably shouldn't let him watch that much MTV..
Collapse