Reminder to self. Don't talk too much to a journalist. Even though she's a colleague. I think I have a tendency to rattle on non-stop and talk abt inane stuff, not unlike how I write my blog entries. And my colleagues actually asked me why I'd given them such an ugly pic of myself. Have to agree. I look like a ghost on newsprint! But heh, I actually don't mind because at least I don't look fat. When I showed Aidan his pic, his comment was "Oh, it's me again! And with Mommy!" I think he's getting used to seeing himself in the papers. Uh-oh!

The editorial piece on mommy bloggers was scheduled for this week because it's the Mother's Day week. I think it came out quite positive. Serene from DL called me last Tuesday, the day before I was to leave for Redang so I did a phone interview with her. I'd passed to Serene four other moms' contacts to interview but she'd only contacted 3 of them [i'm sure you know by now who they are :)]. I thought the pic of

Joan,Terence and li' Clare taken by the ST photographer was really nice! And I like the quote by

Adele about being able to "live vicariously" through her blog for a while when she was on confinement.

I told Serene that if not for my blog, I wouldn't have met these wonderful group of people whom I could share my joys and woes with and my son wouldn't have gotten that many playmates. Too bad she didn't have that on print! 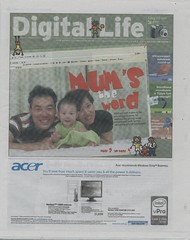 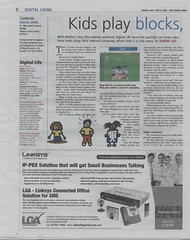 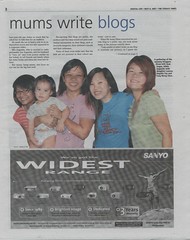 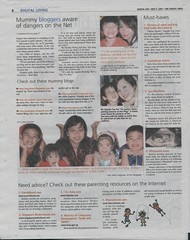