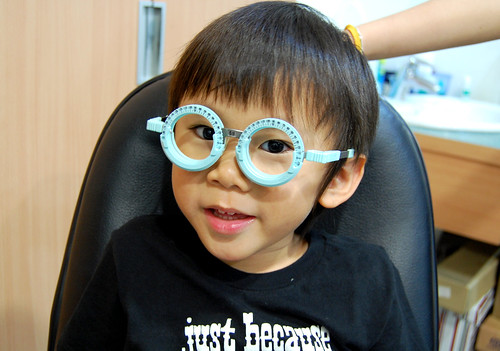 After my previous post, several folks left comments/ emailed me,advising me to seek a second opinon with Dr Khoo Boo Kian, a consultant eye surgeon from the Eye Specialist Clinic at Mt Elizabeth Medical Centre (thanks u all!). He is apparently quite a well-known ophthalmologist and recognised as the best eye specialist for children. Okay, I'm honestly not in denial..if the boy needs prescription glasses, I will get it for him. But I thought what the heck, there's no harm bringing him for another eye check. Oh yes, it probably wasn't clear since I merely posted the eye assessment results but Aidan isn't short-sighted. He has astigmatism. 200 in his right eye and 100 in the left. Which was why the doctor at the refraction clinic at the CCK polyclinic said that he needed to wear specs as it may lead to him having a lazy eye. 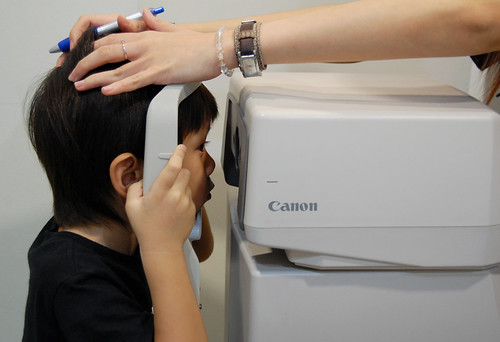 Brought the boy down to the clinic today. The wait for the actual consultant was rather long..about 2 1/2 hours but I was already warned by his nurse when I called to make the appointment. After putting Aidan through several tests and checking his eyes thoroughly, the doctor concluded that Aidan's eyesight degradation was the result of an eye condition known as entropion. Entropion is the inward turning of the lower eyelid, resulting in the eyelashes directing towards the surface of the eye, causing discomfort. According to Dr Khoo, the inversion of Aidan's right lower eyelid is more serious which explains why his astig diagnosis is higher as it is affecting his vision. Actually, this isn't news to me. When Aidan was a baby, his eyes were always teary and his doctor had then informed me about his lower eyelids condition. But he'd mentioned then too that usually, the condition may correct on its own so we didn't think too much about it. But it seemed like in Aidan's case, it got worse. So the eye doctor offered me two choices. 1) Wait another year and see if his lower eyelids will self-correct. 2) Treat it by surgery so that the eyelids can be turned outwards to its normal position, protecting the eye and improving his eye condition. Surgery for entropion is usually done under local anaesthesia, as an out-patient.

The doctor told me to consider both options carefully before making a decision. For the moment, he felt strongly that the boy doesn't really need glasses yet..and also joked that if Aidan was to undergo the surgery, his eyes will probably end up looking even bigger since they will be removing the excess skin at the outerlid. "Will Aidan's astig go down significantly then, after the surgery", I queried. Dr Khoo said that it mostly likely will..especially in his right eye..to about 50 degrees astig for both eyes.I want to add here that the doctor was great..he was very detailed in his explanation and spent quite some time with us, giving me as much information as possible. It was a different experience with the doctor at the refraction clinic who was very flustered (there were many patients waiting) and rushed through the tests.

Oh man, decisions, decisions...Or should I go get a 3rd opinion!!? Anyone of you had or know of someone who had undergone this surgery before?
Collapse