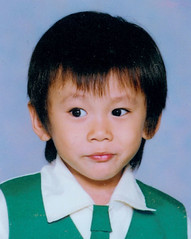 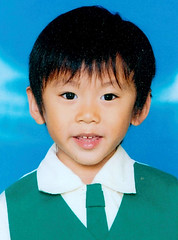 At least Aidan's better at posing for pictures now! But the boy has actually lost some weight in the past year. Look at how sharp his chin is now. And it's not that he hasn't been eating! He has a voracious appetite and can eat more than some adults at times. Guess he is just using up more energy since he is more active now...
*********************************
I wasn't around as I was at work. This apparently transpired when the kids were over at my place on Thursday, after their swimming lessons. Alison had been there since morning and when I checked on them at noon, they were apparently playing very well together. But this was what

June & her hub, Gordon told me they'd witnessed in the afternoon.
( Collapse )
Collapse