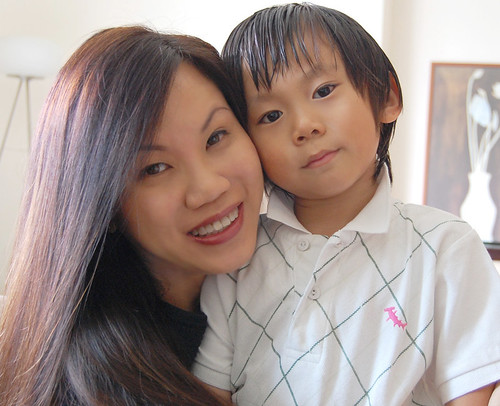 Okay..I meant to get his hair cut but the boy refused..said he wanted a Dragon Ball hairdo (wtf!!?).So I merely trimmed his fringe so that he can still see and will probably get the job done in Dec :P

Have been rather busy with work for the past weeks and the weeks ahead's gonna be quite hectic too. Fans of Guitar Hero watch out..we'll be organising a Digital Life/GH World Tour challenge! Damn, I'm so tempted to get the set after trying it out at New Era office and I don't have an Xbox at home!!

Will be taking a short break end of this week and heading off to Malacca with pals..the trip is more for Aidan since his buddies, Gabriel & Ryan will be there and I know he'll definitely enjoy himself tremendously. And blur me had forgotten that the preview of Salawati is actually this Friday and I'd actually gotten GV to reserve 10 seats for me. Well, do let me know if you still want tickets to the preview or we could wait for the gala in October. The trailer for the movie is out and Aidan is actually in there but his appearance is so brief and 'tiny' that if you blink while watching it, and you may miss it. Let's see if any of you are able to spot where he is :)
( Collapse )
Collapse