Oops..realised I haven't been updating my blog for a while...! Well, guess now I kinda do have a reason to since I have taken tons of pictures recently! Am pretty impressed with my Lumix LX3..Was helping out at the Singapore Entertainment Awards last evening and I couldn't possibly bring my big ass DSLR cam! Most of the stage pictures were taken without flash and the pics came out really clear! My colleagues who were from the Chinese team had been so busy with the award show and had been working till the wee hours in the morning for the past few weeks. Am glad for them that the show was such a success. It was held at the Marina Bay Floating Platform and there was basically no wet weather plan. If it had rained during the show, it would have meant that the show would be cancelled. And you know how crazy the weather has been lately. In fact, it was still pouring cats and dogs with thunder and lightning at around 3pm that afternoon..thankfully, the rain stopped and the show could go on :) 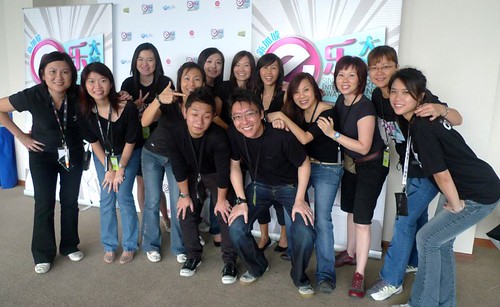 That's us having some fun before the start of the show :)

Beware...I've got tons of pics from the Award Show with lotsa pics of the performers, both on stage and off! I was on duty but managed to sneak off several times to take pics of the performances :P
I ♥ my job :)
( Collapse )
Collapse