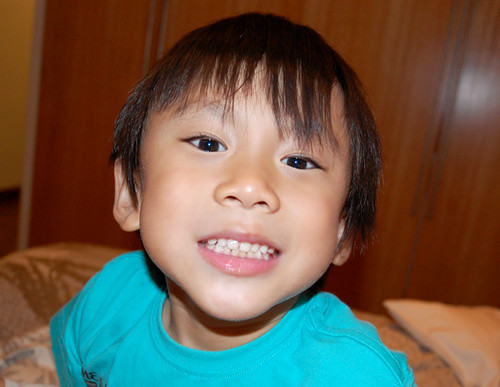 He's at the age where most of his friends/peers are bo-gay but all his milk teeth is still intact! Yeah, not a single tooth dropped yet although two of his lower teeth seems rather shaky. Yeah, Jean called me a worry-wart when I expressed my concern. The later his primary teeth drop, the longer his 'permanent' teeth will stay, she said. Okay, that sounds quite comforting. I told Aidan the story of the tooth fairy and now, he's more concerned than me (for material reasons). Oops! I hope he doesn't start prying his tooth out...

l1sh wrote about being mesmerized by her sleeping child..I do have that problem too. I really love looking at Aidan's face especially when he sleeps. He's such a handsome child (heh, I'm super biased), with his long eyelashes and impish, cheeky look. I can't help smothering him with kisses.. I sometimes wonder how I managed to create someone like that (yalah, I had help too!). Okay, okay..i'm getting way too rou-ma! But man, I'm not sure how I would react when he reaches puberty and starts sprouting pimples and growing hair in goodness knows where..
Collapse