Hmm, realised that I've posted too many pics of myself recently. Gotta neutralise that so here's a pic of the cheeky boy :) 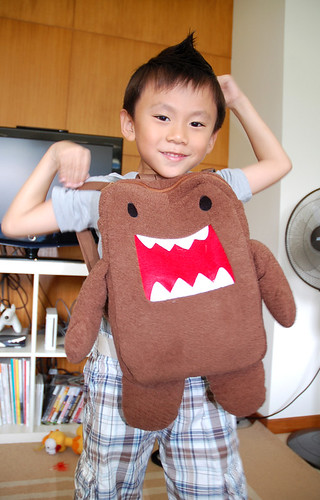 Had totally forgotten about this but

jemauvais' comment in my previous blog entry jolted my memory..

This happened last Thursday at my place when I had a crazy bunch of people over. I was at the dining table having some of the delicious crab noodles from Melben when Yun Huei called me over. He, together with some others like-minded people like Wei Chi, Richard & Elaine were laughing hysterically over something and I was also curious to know what it was. He handedme a sheet of paper. It was Aidan's spelling list handwritten by the boy's grandma. Yun Huei asked if I thought there was anything wrong with the list. I'd been teaching Aidan his spelling for the past few days so I was quite taken aback when he'd asked that because I didn't notice anything earlier on...