Reminder to self. Never..! I repeat..never tell yourself how lucky you are that your kid hardly throws tantrum and is well-behaved in public. Because he'll prove you wrong soon after.

It is inevitable, to compare your kids to others. I admit, I can't help but do so. That is why I do worry a li' when I realised that Aidan is much slower in his speech development..but i try my best not to. Compared to others, he's quite a bochap boy who doesn't cling to us parents much. He's always been this way since he was a babe. Aidan's very independent and is able to amuse and entertain himself at any place & any time. Yet, I do lament about how nonchalent he is at times and envy other parents whose kids who are more needy of their moms. I know it sounds absurb but sometimes, I do want to feel like I'm my son's centre of universe. I think those of you who've met me & Aidan willl better understand what I'm talking abt when I describe Aidan's behavior. I can bring him to a neighbour's place (she stays two blocks away), and leave him there to play with his friend while I go back home for dinner and when I return, it seems like he didn't even realise I'd ever left. We come back from work and once in a while, the boy would deign to run to the door to greet us..giving us the perfunctionary hugs or kisses but immediately after that, he'll just run back to what he's doing and seemed to have forgotten our existence. There are times when he'll simply ignore us, even when we call out to him. Quite kek-sim lah! We wonder at times whether it's coz we aren't paying him ample attention, whether he thinks we are not showering with enough love and spending too much time at work.

But there are moments when he will become really affectionate, calling mummy and daddy over n over again..and manja us a little..times like these are rare and precious. Then again, he is generally a good boy and hardly ever misbehaves..He doesn't fight with other kids over toys and doesn't get worked up when his stuff gets taken..He's willing to share his goodies and food with others..(oh no, i'm praising him again)..So I tell myself that I shouldn't be complaining. Man, I'm contradicting myself so much in this entry. Getting quite schizo..Stop worrying and comparing *bishbish*!

Oh yes, back to his behavior. He started with his tantrums again..and this time round, it does gets harder and harder to distract him with other activities once he gets started. I guess this is just part of his growing up process and we just gotta deal with it. Just last week, we were at Novena Square for dinner and 'coz he finished his meal really fast, I decided to bring him around the mall. We went to this toy shop and usually, he'll be happy to browse ard, playing with whatever toy that attracts him. He hardly ever ask us to buy any of the toys for him after he's done. He was going from aisle to aisle, exploring the different shelves and before I knew what was happening, he swiftly grabbed this box of toy, and scooted out of the store! The storeowner on seeing what happened actually reached out for him, trying to block his escape but he managed to side-step him and merrily ran away. I quickly followed after him but the li' boy had already ran to the opposite side of the mall, gleefully holding on to the toy tightly. Finally managed to capture him and carried him back to the store, explaining to him that he shouldn't just take a toy away from a store without permission. He refused to let go of the toy at all and I had to prise it out of his hands. He was unhappy and showed it by sitting down on the floor, and started stamping his feet and crying loudly..Passerbys were starring at him and giving me pitying or 'dirty' looks..oh man..I quickly brought him carry out of the store, comforting him. Decided to bring him to the pet store downstairs where there were some hamsters and rabbits which he loves to watch. He refused to be consoled initially but after a while later, he finally stopped crying..Fortunately, he didn't try to kidnap any of the hamsters or bunnies...

evonnetay just told me that Aidan probably takes after me coz I was exactly like him when I was younger..bochap, independent, non-clingy and always trying to run away from home . (hope he doesnt do that when he grows older :P). 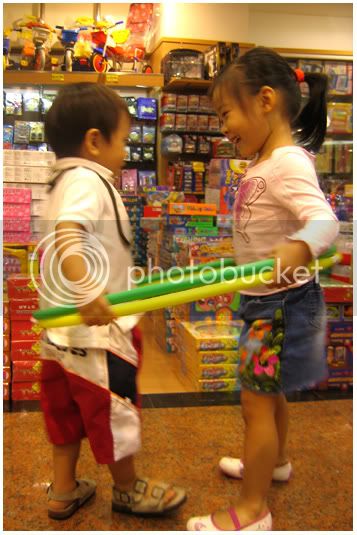 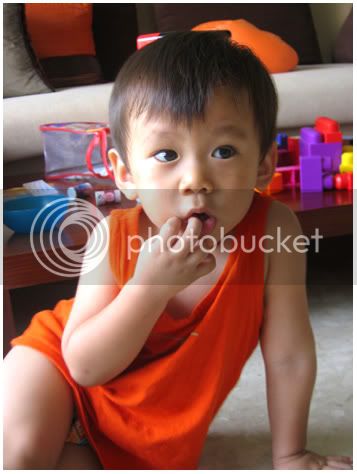 This is his kid, Lancerkid as Koda (geddit geddit!??)

And this is so Austin Powers..