of work and play..

Yeah, the creative was inspired by Roy Lichtenstein's works
& that's my lipstick she's holding :>
Was swamped at work for the last few weeks which explains why I haven't been updating & commenting on ur ljs that often. Had to work on the launch of the TNP New Face call for registration ads...loads of stuff to plan for like the photoshoot and also trying to get more sponsors for the event plus having to juggle with GSS and other promos.I think i have a problem with time management :P

I know it is a stupid excuse but I don't really wanna get pregnant this year coz I won't wanna look like a bloated whale standing next to young nubile girls from this contest..shallow hor!

Hey..the prizes ain't bad actually. $10,000 if you win the title, $5k and $3k respectively for 1st and 2nd runnerup. And no donning of bikinis or having to go thru any nerve wrecking interviews. So, if you know of anyone between the age of 15-23 who fits the bill, do ask her to join. Oh, only for singles ah! Last year, one of the girls who was shortlisted for the finalists had to be disqualified because she had already registered her marriage. Her husband was furious and wrote a nasty letter saying that we wasted their time and it wasn't clear in the ads that married women weren't allowed to take part even though we'd indicated that it was only for singles. Even when quizzed during the audition round on whether she was married, she claimed that she wasn't. Apparently, she didn't considered herself officially married even though she'd ROMed already *roll eyes*

Will probably be heading down to Zouks and some other nitespots to do some scouting for fresh face. It's more for publicity purposes. Working with fashion consultant, Daniel Boey for the first time. He's trying to get some of his celebrity friends like Julian Hee *slurp* and Denise Keller to help out in the scouting so it should be a blast :)
*********************************

joeaugustin gonna be the MC for the GSS Shop & Win 'live' draw event at Wisma @2.30pm this coming Sat! Sorry

auntyadele, can't pay him that much so you can't buy that much bling bling with the dough.. Am glad that he was able to help me out. Any of you guys got nothing to do this Saturday, come down to support eh! Gonna give away cash vouchers to pple to are able to guess winner of the Subaru Impreza! Watch out for the ads in the papers :) (heh..me selling koyok again)

Very strange this boy.
He wasn't afraid to touch the snake but he was scared of a butterfly!

Just to prove that we weren't there just to take pictures of ourselves..here's some animal pics :P 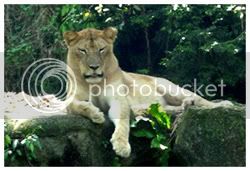 Ooh..this pic of a giraffe from Peter's blog is so nice. Wonder why none of my animal pics turn out so beautiful.

Some videos taken at the zoo :)
Aidan & Chloe first sighting of a lama :)
Video 1
Suaku me has never seen a sloth before and I was so amazed when I did see one on Saturday..Couldn't resist capturing it on video while it was making it's way down a tree..
Video 2
Poor Aidan was confused by us. We kept on showing/naming him the various animals/birds and he tried keeping up with us..
Video 3
Here's Aidan and Chloe at the waterplay area :)
Video 4