Was perusing thru some of the pictures I'd taken of Aidan when he was convulsing with laughter while we were fooling ard in the car..and realised that the li' one have dimples..really teeny weeny ones! Never noticed them before actually!

I love dimples on people..In fact, I wish I have them (those on the bum doesn't count)! Hubby doesn't have them either. They are so cute on one's face especially when it shows up with a smile (my fave are those on Lisa Ang).. 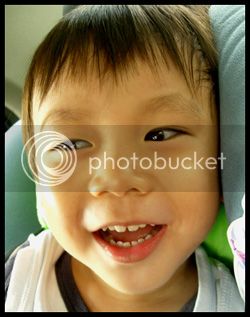 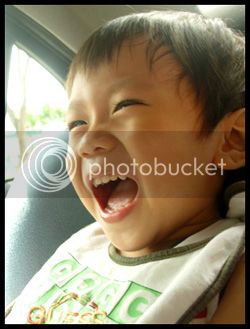 Or could they be just laugh lines?

On a more serious note, the li' bugger is quite a handful now...basically, he's getting more and more stubborn! Once his mind is made up, it's really tough to change it. Can be quite a headache at times! When he doesn't get his way, he uses his best tool - tears! And man, can they fall ever so easily! Fortunately, he behaves when he's outdoors or else we'll probably avoid bringing him out :P

Argh..haven't thought about what we should do for his birthday yet..I need some ideas!!