I think one of the best part abt having a child is that you get to relive the experience of being a kid too just by bringing him out..Our weekends are usually spent with Aidan, kind of a way to compensate for not being ard him much during the weekdays. Having good friends who have kids of their own helps alot too because most of the time, they are the ones coming up with bright ideas on the activity of the week.

Visited the Escape Theme park at Downtown East for the first time last Saturday. We took advantage of the $4 per adult entry promotion (the UP is $16.50) which saved us a bundle.. I'm actually not into fun-rides and all but oh well, the kids loved it so what the heck. And I had to accompany Aidan for most of the rides since he wasn't more than 110cm..Ended up being fried by the hot scotchin sun and drenched with water as a result..but it was fun :) I enjoyed myself more playing those carnival games (especially the horse-racing ones) although I have to admit, I'm quite a sore loser (I swear it's rigged!).. But nothing beats seeing the kids' big smiles when they collect their winning soft toys :)
The Usual Pics Galore.
Hubby couldn't make it as he had to go back to work..on a weekend, bleah!
That's why there arent any pics on the rides coz I was with Aidan.. 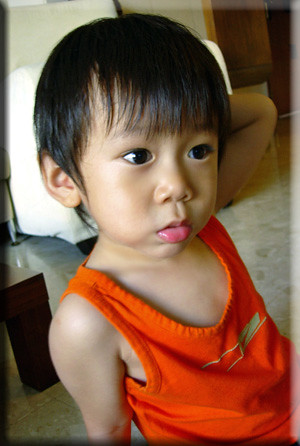 Aidan has learnt how to lie...a blatant one I must add!

We were having dinner at a zi-char place near our place. He wanted to 'read' this 8 days supplement on HK which I'd brought along. So I promptly passed it to him.

He then accidentally dropped the magazine. The boy's reaction astounded us. He immediately pointed his finger at Nenita and said "Nenita dropped the book! Not me!" Both hubby and I were flabberghasted. Why did he see the need to lie? We weren't even making a big deal nor did we display any anger when it happened. And he refused to admit he was wrong and kept saying that Nenita was the one who'd dropped the mag. "No say sorry to Aunty Nenita!" he insisted.

During bedtime while tucking him in, I said to him, "Nenita's very sad. You accused her of something she didn't do.". Nenita who was also in the room played along and put on a very miserable looking face and pretended to cry. It was then that he finally showed some contrite and cried out "Nenita don't sad. Don't cry! I'm sorry!". He then jumped out of bed, went to the study room where hubby was and apologized to his daddy too.

Gah! Isn't 3 year old a li' young to start doing something like this?