I'm now starting on the campaign for this year's New Face..*argh* Can't believe I'm doing this all over again when last year's event seemed like it ended not long ago (when in fact it's been more than 7 months!). But I do love this year's ads! Very classy and stylo.. and the girls looked fabulous. Pie Ling (red), Shikeen (blue) and Renee (gold) enjoyed themselves tremendously at the photoshoot, as they pretended to be 'interacting' with the cars when there weren't any. They actually thanked me for letting them do this series of ads :)

Again, if any of you have any young pretty, nubile gal-friend/sister/cousin (age 15-23) you think is suitable for this contest, do encourage her to take part! No parading around in bikinis and Miss Singapore pageant type Q&A required! Plus this year, Female Magazine and WKRZ are the official magazine and radio partner (a call for integrated media lah!) so the girls get a chance to appear in the mags and to be 'heard' as well. Now, if only I can get the girls to blog :P
******************************************** 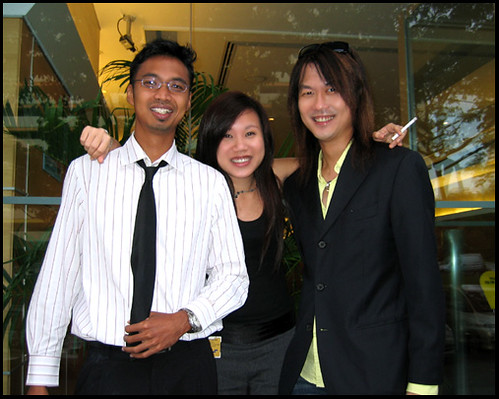 The 3 of us are responsible for the TNP Nikon Soccer Babecontest..Ivan does the editorial and Sanjay is the marketing guy who brought in the sponsor, Nikon. Those two are probably enjoying it more than me 'coz of the eye-candy..

We've already shortlisted the 4 semi-finalists.. and they had a photoshoot 2 days ago. And by next week, we would have gotten our two finalists and readers will decide who the winner would be. 3 out of the 4 girls has indepth knowledge of the game and 2 of them play soccer as well. Gotta admit, one of the girl is there because she photographs really well (though methinks she puts on way too much makeup). It's been kinda fun working on this..although it's almost like a prelude to New Face since it involves beoing girls and shortlisting them but the latter is definitely a bigger campaign.

It was my first time working with the easy-going Ivan too. We were discussing about some of the girls and how their interviews have sparked off some criticisms from soccer fans...in particular Charlene (a hardcore Spurs fan) whose blunt remarks have rubbed some readers the wrong way. When Charlene was kinda taken aback by the emails, he told her to take it easy and not let it affect her..He should know 'coz he gets it all the time. Told us that he's been called names like faggot (heh, I know someone from my ljfriends list who did exactly that in one of his entry) and has since learnt to have a thick skin since there is no way that they can please everyone. People tend to form impressions based on how one looks and his shoulder length rebonded hair and lanky frame were probably the reasons why they thought that of him. Many (including me) were surprised that he's actually married and has a cute 2 year old boy! I used to think he was this super playboy who's constantly surrounded by babes..:P

It's been great working with TNP for my promos so far especially with people like Ivan, Ian and

Wee Teck (heh..all of them have blogs)..And with the World Cup just around the corner, there's loads more football related promos coming up! Gonna be really busy in June/July! 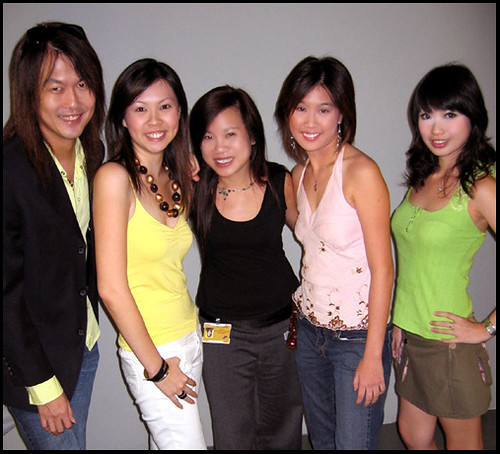 With Ivan & 3 of the semi-finalists..

It's the annual The New Paper Big Walk event at the National Stadium tomorrow. Gonna be the last year at the stadium since it will be torn down for reconstruction. The 4 soccer babe girls will be there as well since Nikon is also one of the sponsor of Big Walk..I

Gotta wake up early and be at the stadium by 5.30am tomorrow *awk*..
******************************************
Some time at the end of April, we organised an adventure drive to Desaru. We had abt 160 people who joined us for this event. I wasn't keen to go but had to because it was work..but I ended up enjoying myself loads. Best part of the trip was that the participants were all really sporting! The sponsors who came along with us were pleased and said they wouldn't mind presenting the event again next year.. 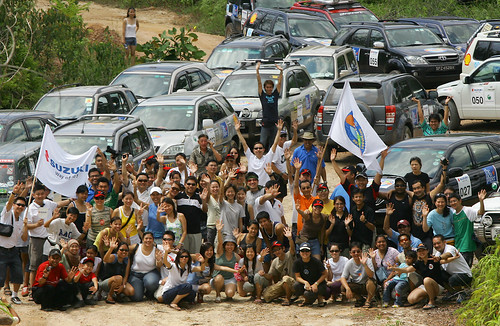 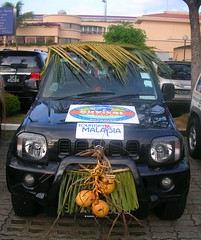 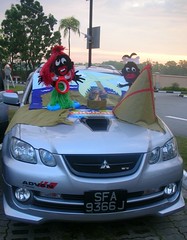 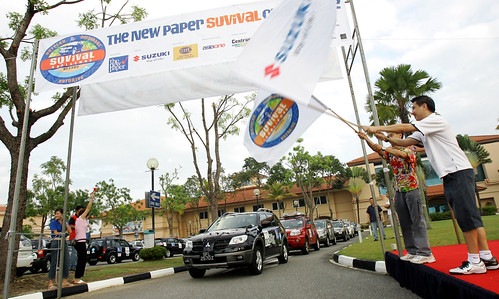 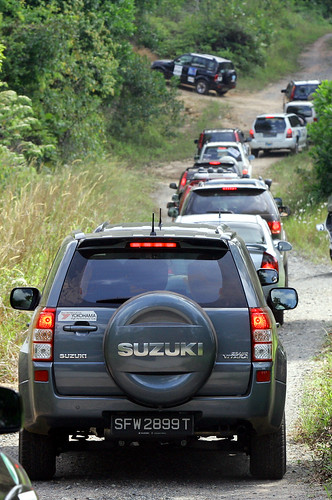 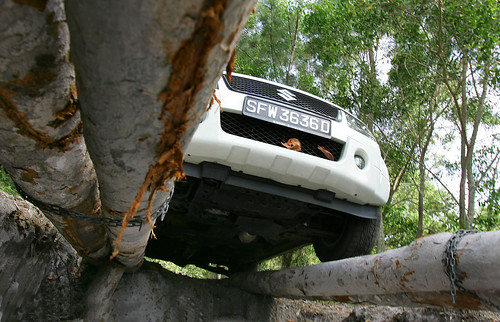 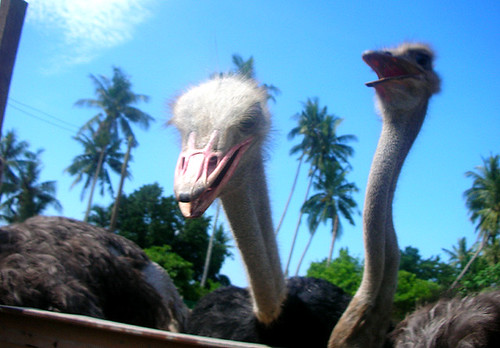 Ostriches at the farm.. 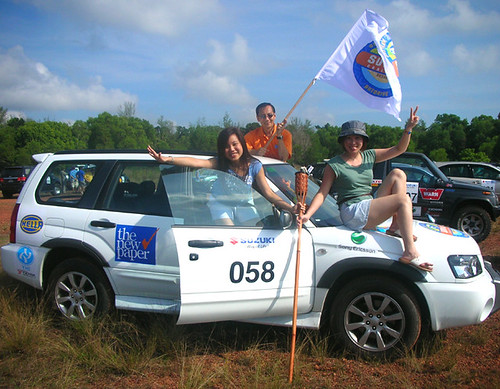 with my colleagues, Danny & Huey Jiuan 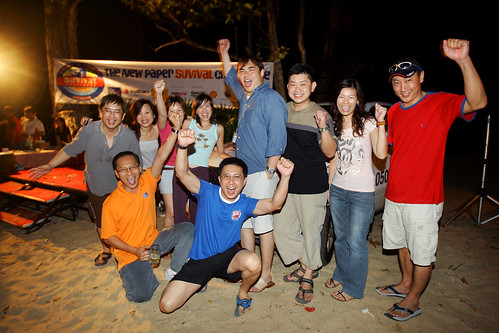 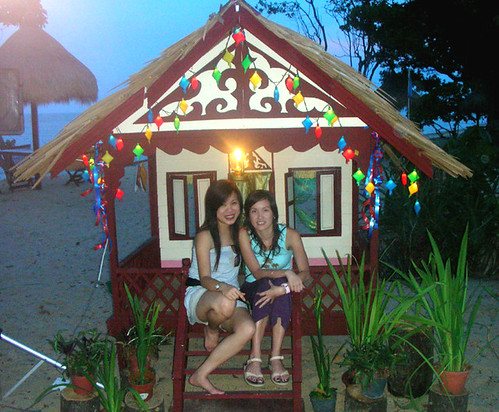 With Winnie, a rep from Hella (one of the sponsors) 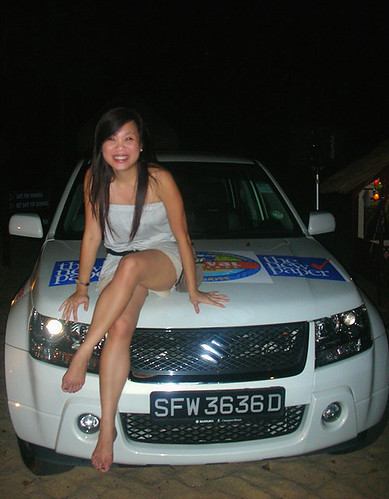 pretending to be a car model :P