Worked throughout the weekend..yes, on both Saturday & Sunday! The New Paper New Face auditions was on Sat and I was there from 9am to about 5pm and then the day after, I was at the TNP/SPH MediaBoxOffice World Cup Screening at Toa Payoh Hub from 8.30pm to 6am in the morning. Super mabok man! My body has yet to recover! Heh, the paper used the photographs I took of the World Cup event so they gave me photo credits, even though the pics were so crap :P

This year's batch of New Face girls ain't bad imo although there were a few who disagreed with me.
Here are the photos of the girls@ the auditions! 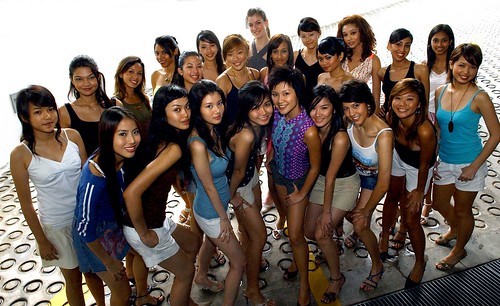 We're doing something extra this year though..Behind the scenes vodcasts for the contest!=) Footages of the auditions will be uploaded soon!
******************************
And this is so ridiculous. Some people are just analysing way too much and seeing things that aren't there. This ad was done by our branding dept and there was no way that the newspaper placement was deliberate, unless the creative house they engaged to do the photoshoot and props was pro-gahmen. Or maybe they were co-erced to do so :P Sheesh!
Tags: tnp new face 2006, work
Subscribe