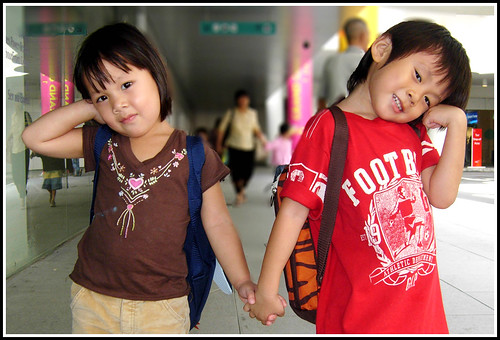 Aidan's first day of filming for his minor role in the movie started yesterday..I took half day pm leave so that I could be around when the crew came by in the late afternoon. Not sure if I'd mentioned it before. The production house had asked (after recce-ing my apartment) whether they could use my place as 'Ethan's (Aidan's screen name) home. I agreed because it was much more convenient for me since 1 of the 3 scenes Aidan had to do would be shot here. It was thus more convenient for me and they would also be 'compensating' me for usage of my place. There was only one other scene (w/out Aidan) that would be done in the living room.

Arranged to meet with Mong and her girls for lunch at Vivo City and li' Macy followed us home (Mong had errands to run) and spent the afternoon playing with the boy (and tiring him out :P) Actually, that was the idea as the scene that he had to do was a sleeping one. All he had to do was to lie on the bed and look drowsy or pretend to sleep..so I didn't want him to be overly hyper. My only fear was that he could become rather grotchy since he didn't nap in the afternoon.. 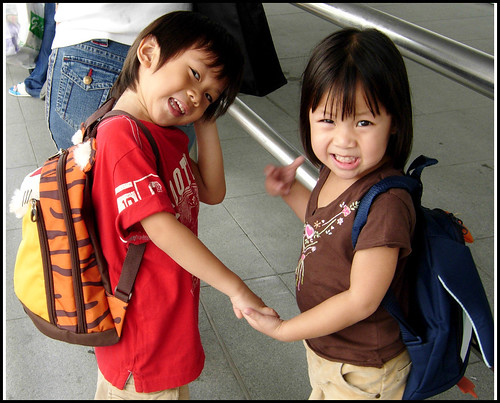 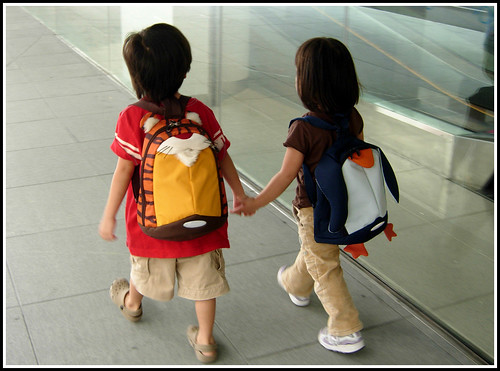 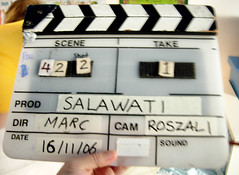 The crew came by about 5+ to set up the place and the actual filming only started at about 7pm. Aidan was fine with having so many strangers in the house .. it helped that the crew was so friendly to him, entertaining him once in a while. He sure enjoyed being the centre of attraction too. I'd also briefed him that about the shoot and what he had to do but I'm not sure how much of what I said he understood..So when they was about to start shooting and getting everyone into their place, the boy was a li' aggitated, mainly because of the lights that was shining directly on his face. "Too bright!" he complained. But after a while, he became immune to it..I think he wasn't too used to his 'environment' too since they redecorated his room a little and his rainbow canopy had been taken a way. 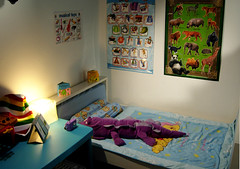 So when the film started to roll, Aidan stared at Kelly (his screen mom) as she sang to him..
Either he's wondering who this strange woman was or what she was singing(the song was 海鸥).. 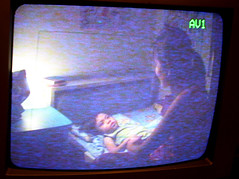 He started to fidget after a while..so the director yelled 'cut'. 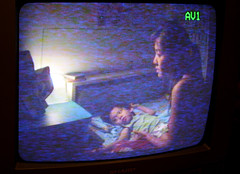 They decided to try it again..and this time round 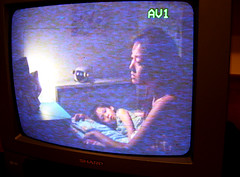 the boy actually laid there motionless..
you could tell that he was getting sleepy. 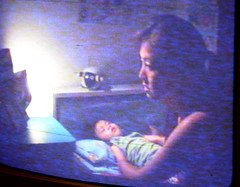 and in a mere few minutes, he started snoring away..perfect =)

Some of the crew actually thought he was acting (hah!) and only realised that he was really sleeping when he didn't wake up after the filming ended. They all said it went better than expected because it usually isn't easy to shoot with kids. I was amazed that the boy could sleep with so many strange people & equipment in his room and all that bright lights on him. I wasn't even in the room with him. And he usually sleeps abt 8.30pm so I didn't expect him to doosh so early! Must go thank Macy :P
******************************************* 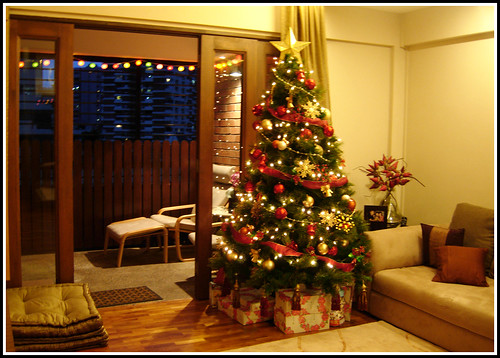 Finally decorated the X'mas tree..it had been quite bare for a while! Decided to go with the red and gold theme!
Bought most of the ornaments from Tangs & Lim's Art & Crafts..spent a bomb!!
Hubby was in bangkok for an office retreat so I got him to buy those 'lighted-balls' and hanged them at the balcony... 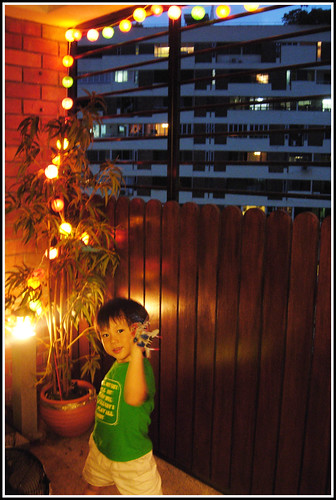 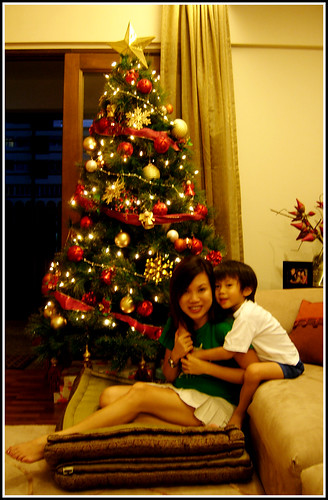