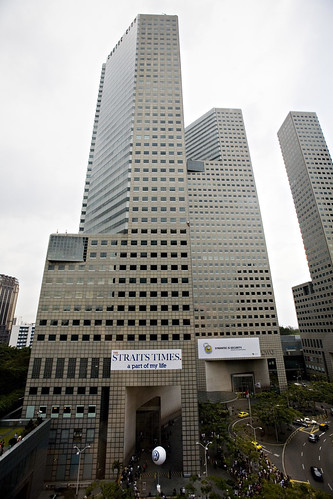 Can u see Spidey?
He made it! To the top of the 176 metres Suntec City Tower 1! It actually started to drizzle for a while when he started his ascent but thankfully, it stopped. And the great thing was that the weather stayed cool throughout. Before his climb, Alain mentioned that should there be rain or if he thought that he wasn't able to make it to the top, he'll give us a hand signal to let us know so that we'll loosen the string to let him rappel down. We were like x_x ... oh man, please don't let that happen!

The turnout of the event was huge..some came to see Alain Robert in action, others for the grand prize of the Volkswagen Touran Sport and majority for both! The papers reported it as 15,000 but the guys from Suntec told me that it was more likely to be about 20,000+. The crowd reception was fantastic, cheering him when he did his climb and congratulating when he completed it. It took him about 45 minutes to go up and about 10 minutes to come back down. Poor guy was tired after the climb. Could see that his hands were blistered.

Oh, and during the grand draw of the Volkswagen Touran Sport, the first name that was picked (William Tiong from Eunos) wasn't around to claim his prize. We waited quite a while to see if he could be amongst the crowd but eventually had to pick another winner, much to the delight of the crowd.

Am relieved that this event is over. We only confirmed that we were doing this event slightly less than 1 1/2 months ago and it had been a mad rush trying to put everything together. And we only got the new ST Logo 2 days before the revamp (8 Aug) so can you imagine how short a time we got to prepare for all the materials (outdoor banners/teeshirts/ads/event backdrop etc) which required the logo. We got the police permit to allow the climb just 2 days before the event. Anyway, I think everyone's happy.. we manage to get good coverage from tv which is great coz they hardly cover our events! Next year we'll have another headache so if another one has any bright idea, feel free to share :D~ 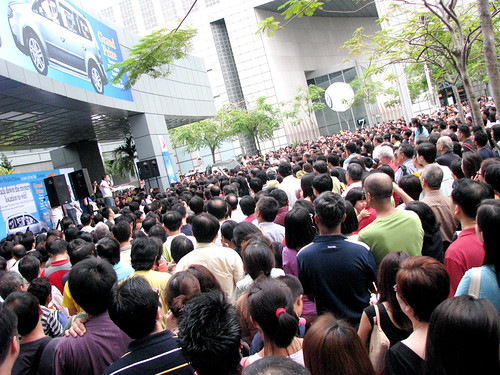 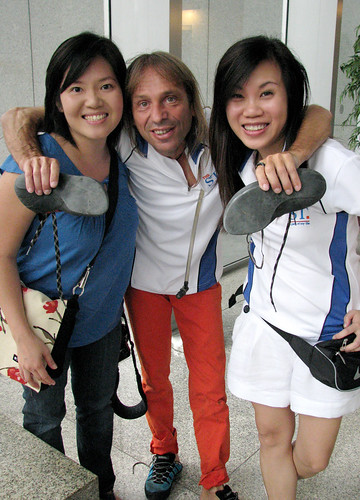 Joan was helping me to take pictures of the event..
Most of the (nicer) pics of Alain on this entry was taken by her. 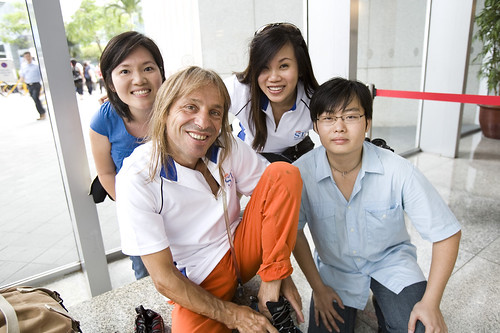 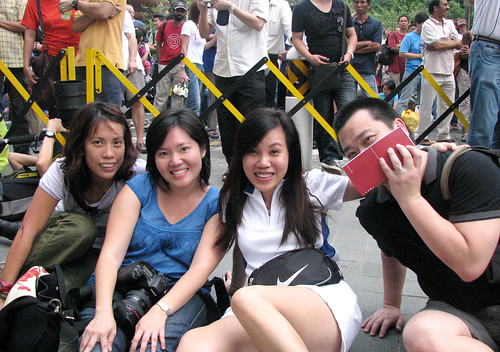 At this time, Alain was already somewhere on the 20th storey.
With the photogs, Maye-E and Joan and the very coy 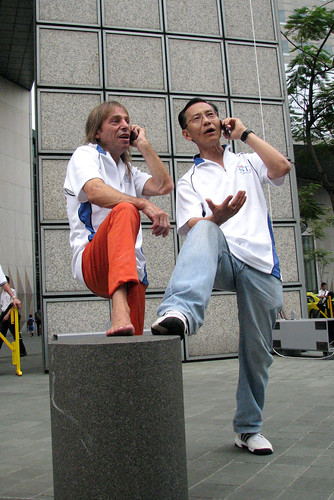 The french & singapore ahbeng side by side :P
(that's my boss Danny on the right) 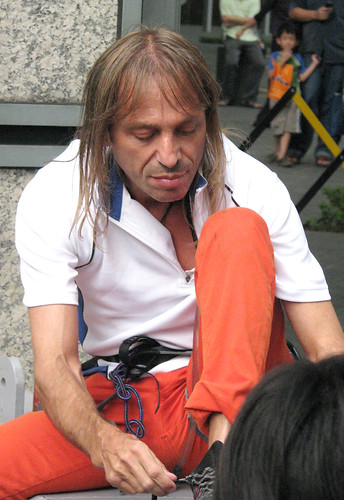 Getting ready for take-off 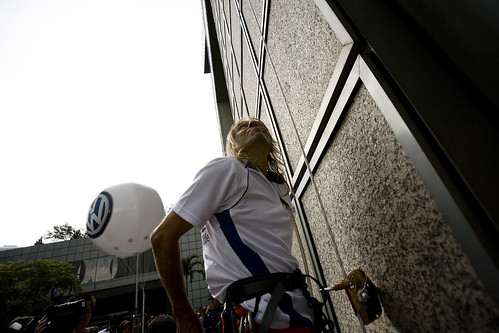 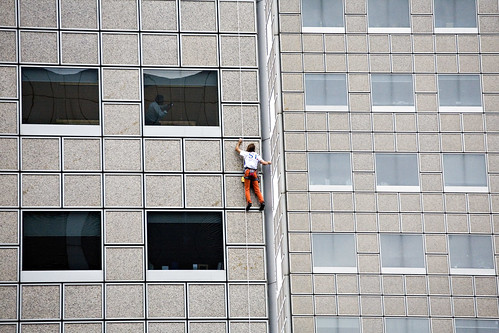 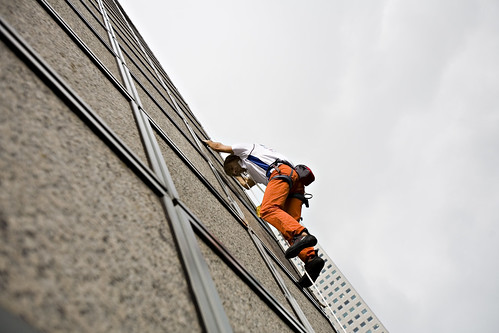 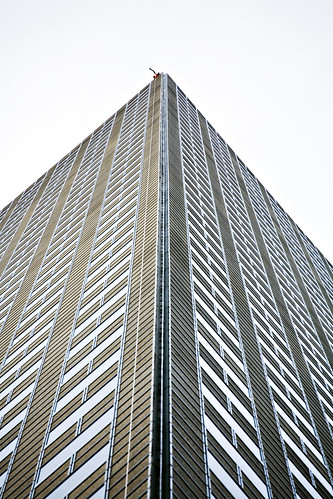 Alain reaching the top floor and waving to the crowd!

This shot was taken by Maye-E (AP Photo), as he was rappelling down the tower.. 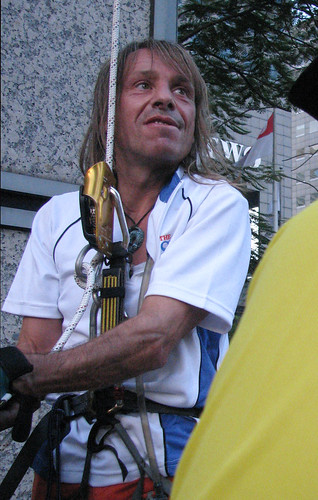 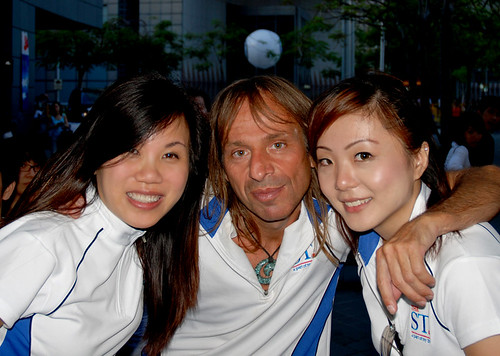 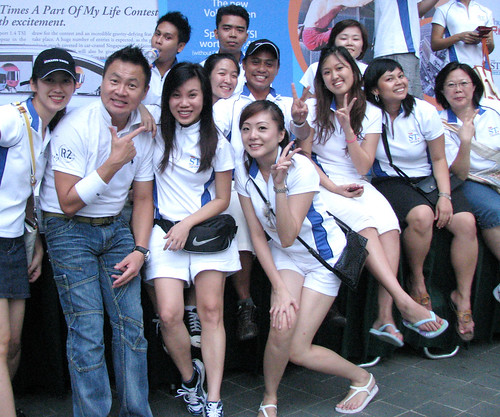 Group picture..
The guy next to me is Cyril Lim.one of the best MC for a big scale event like this.
He really knows how to work the crowd and is one heck of a funny fella! 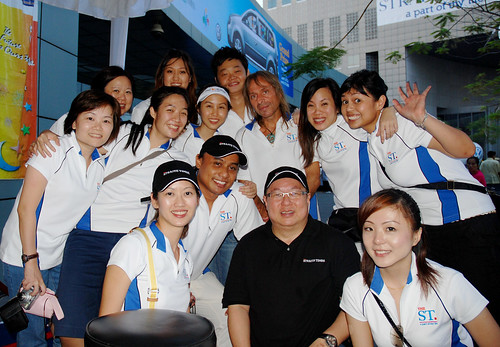 My photo album on the event here
The video footage I took..my hands shaky lah, so not very good.