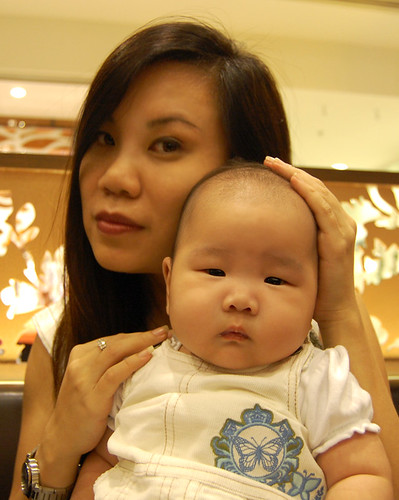 Yeah..obviously not my baby...That's me with li' Kristy whose mommy has kindly loaned to Jean & I for picture taking/brief babysitting! The li' bub was soooooo cute and remarkably well-behaved. And for a while, it did make me regret not having another baby when I still could :P And that baby smell...man, I really miss that! Again, it was nice catching up with

Jean and seeing baby Kristy. Had been quite busy at work with several on-going projects although that wasn't the reason why I haven't been updating. It was just pure laziness on my part :P So this blog entry will be like a 5-in-1 with tons of pictures (which some of you would have seen on my FB) which was taken during the past few weeks or so :P
More pics of baby Kristy and us :) 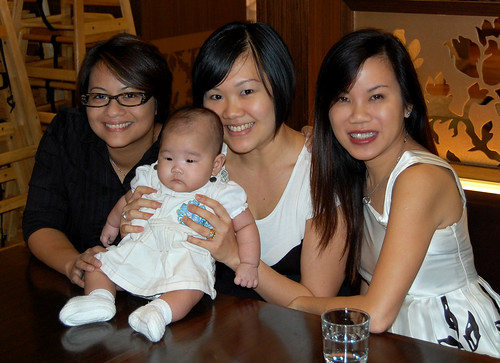 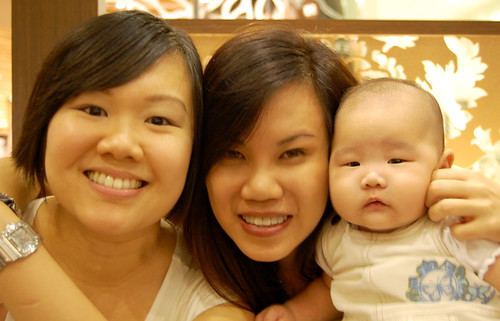 getting in btwn the mommy and the baby :P 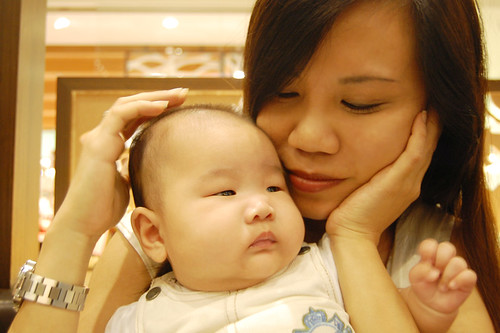 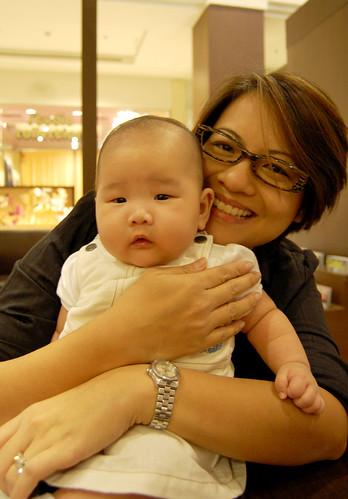 Jean's turn with the bub.. 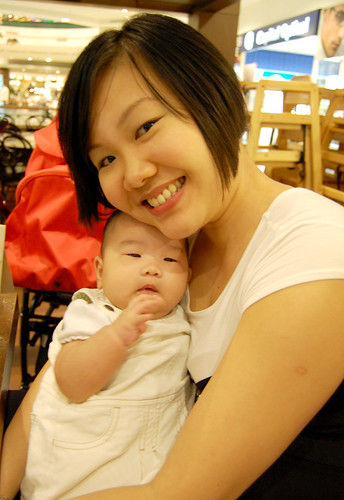 yeah, we did return her to the mommy eventually 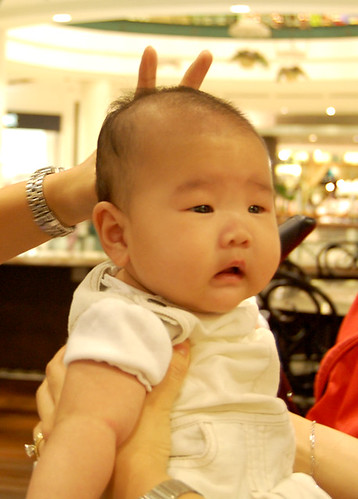 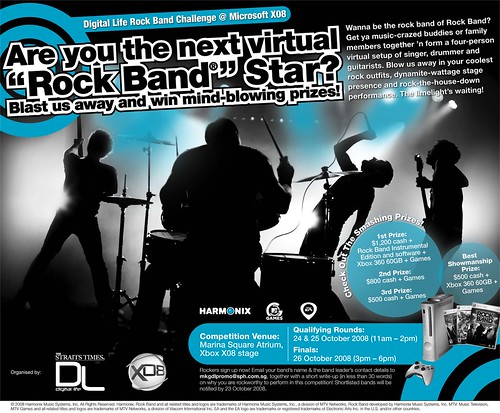 Got up close to some famed personalities at the Singapore Sun Festival press conference on Friday. Geoffrey Rush (better known to some as Captain Barbossa of Pirates of Caribbean and the voice of Nigel the pelican in Finding Nemo) was a last minute replacement of Robert Redford for the gala opening for the festival. Several jokes were cracked about the last minute switch (mainly by Mr Rush) and the writeup in TNP was probably the most comprehensive coverage of what the actor had said during the conference. 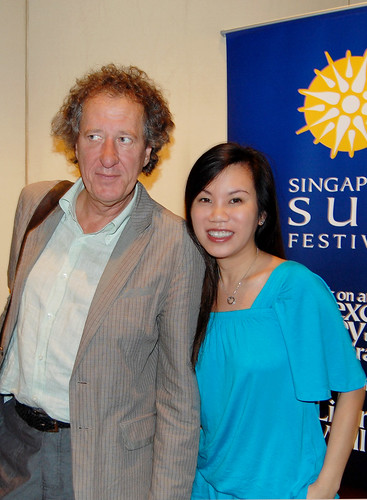 Darn..Captain Hector Barbossa was looking at some other camera... 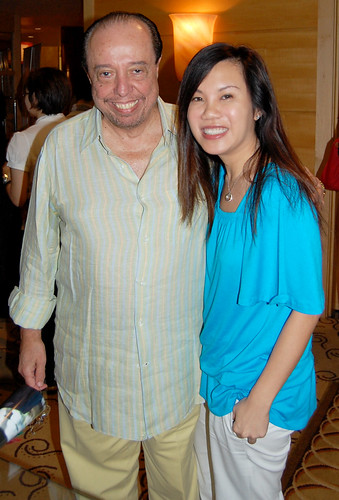 Grammy award singer/composer, Sergio Mendes..
probably those who are as old (or older than me) will know who he is..

Last Friday was the TNP New Face finals..no longer my baby but us colleagues still chip in to help out during big events like this. Of course we all took the opportunity to take heaps of pictures! The winner wasn't unexpected although everyone kinda wished that a chinese girl will win it again. Have to say that this year's group is quite even..and the girls were all so pretty. We were griping that the girls kept getting younger and younger and then realised that actually that wasn't the case. The girls have always been ard that age group..it is just that we've gotten older *awk*.

Most of the catwalk pictures (taken by Joan) have been posted here on Facebook so if that's what you are interested in, you can check it out there. 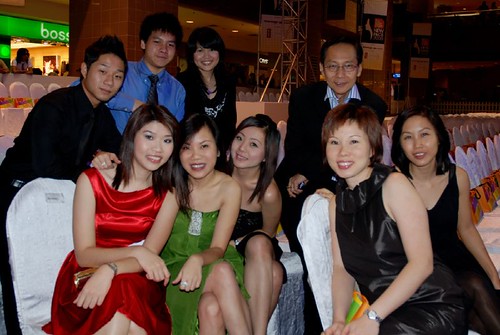 that's my division..we got some new interns in to help us do the nasty jobs :P 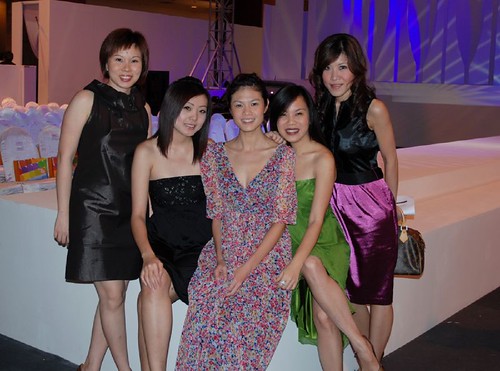 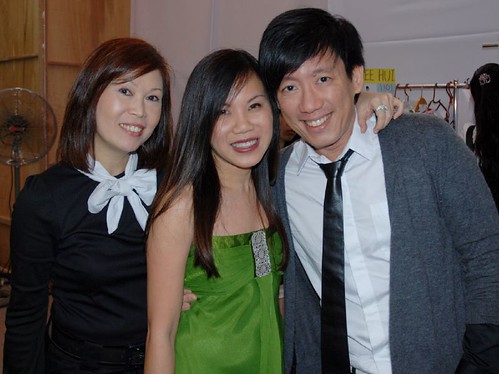 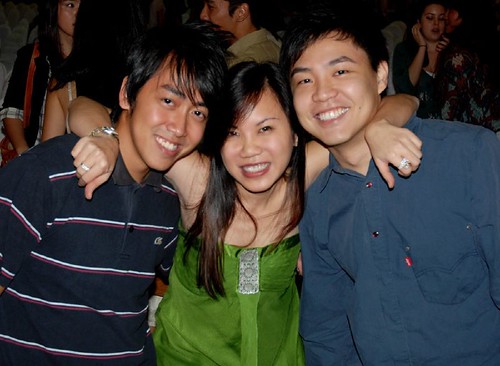 Shaun & Roy who came to 'support' their faves.. 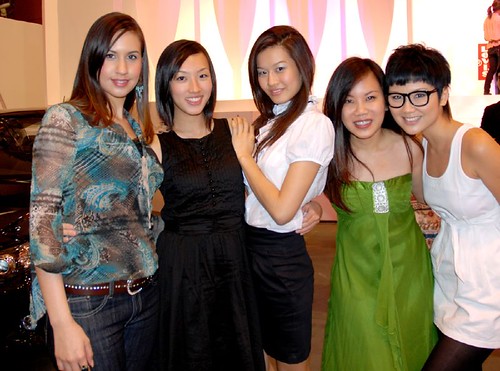 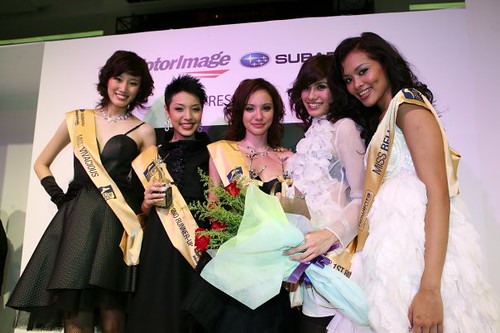 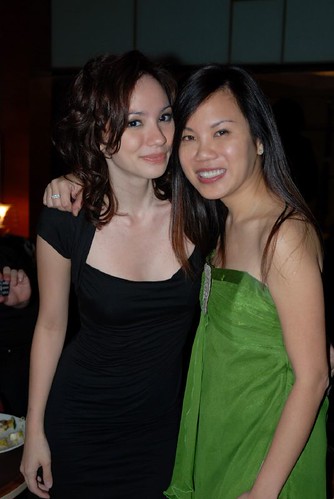 Shahirah Price..who was the winner.. 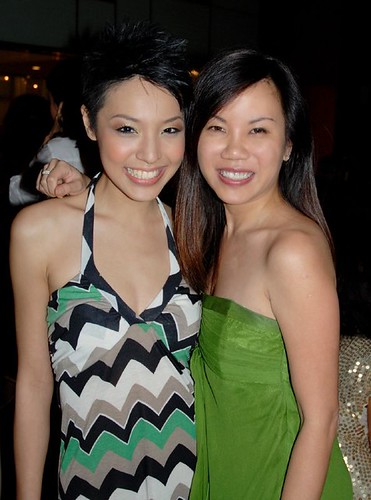 Geraldine Chua, a Spore Idol alumini who was the 2nd runner-up 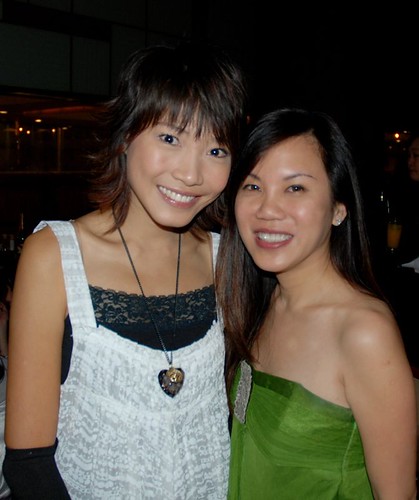 ex-TNP New Face girl and now more known as one of the 7 princesses, Dawn Yeoh..

Couldn't resist posting this last pic because it got loads of comments from the ladies on facebook :P 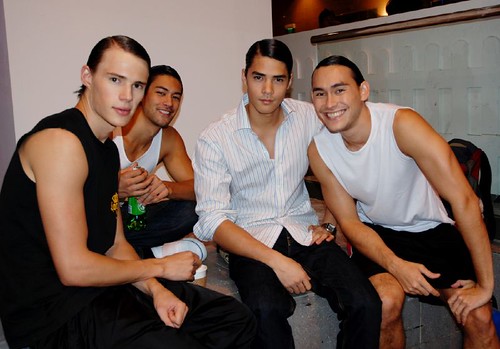 Not fair man..how come guys can be so pretty! 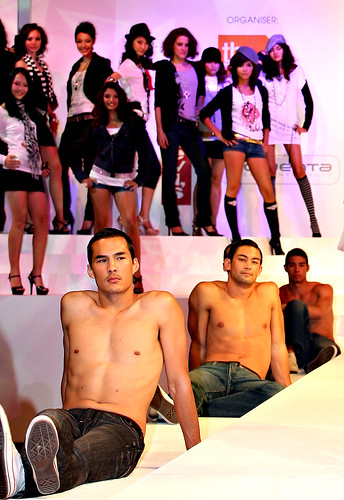 I finally had Aidan's locks snipped off and he looks damn duh now! Oh well, it will eventually grow so I'm not too perturbed. This has been a month filled with tons of activities since he had many parties to attend and has been playing quite regularly with his pals. He's been quite a good boy too, doing well in school getting full marks for his weekly english and chinese spelling which he takes just a few minutes to learn. I'm quite relieved actually because it does mean that he has the capability if he does put his heart to it. The year is coming to an end soon and it basically marks the end of his kindergarten years and soon, he will be in Primary One :)

One problem with being car-less is that we (I take turns with Nenita) spend quite a bit of time ferrying the child around for lessons, enrichment classes and various activities like birthday parties.Thankfully, my in-laws still help out by sending Aidan back from kindergarten almost every weekday. There are occasions when I'm stuck at work/events that I do end up having to depend on friends I can trust. Jin & June...thanks so much for your help with Aidan..especially on Fridays during art lessons and Berries and swimming lessons on Saturday! I really appreciate it :) Happy Birthday to the your October boys :) 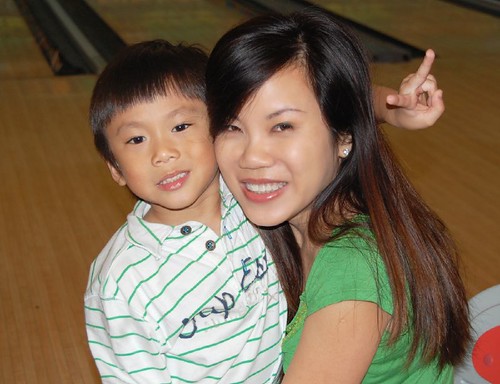 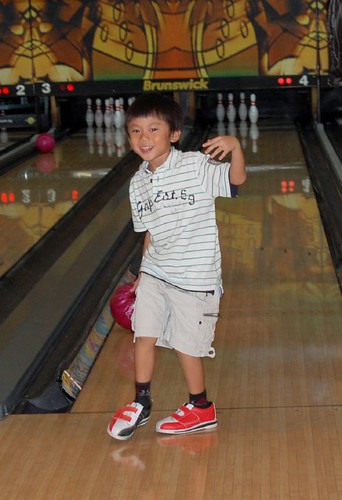 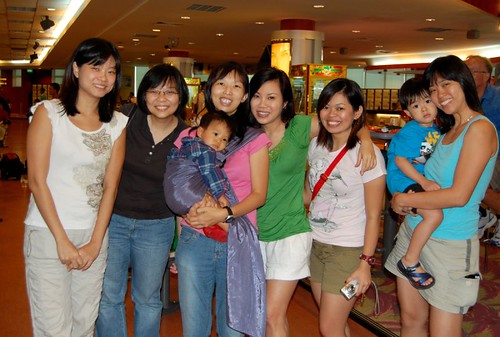 Jessica and Wendy with li' Jarett 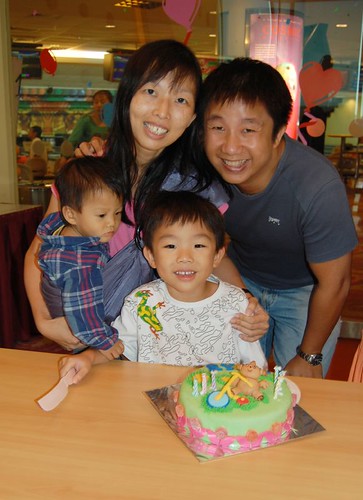 Birthday boy Ryan and his family... 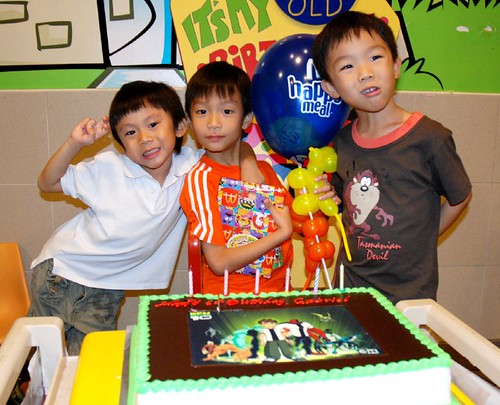 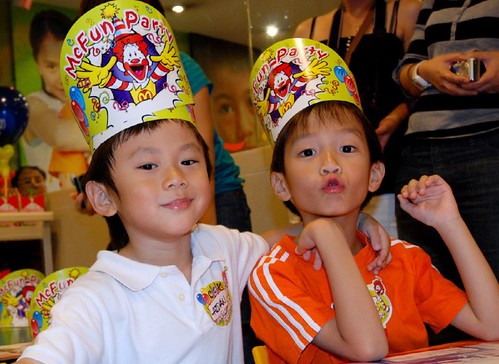 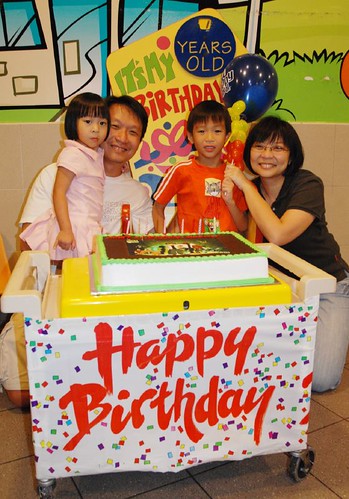 Birthday boy Gabriel with his family..

I'll end off with 2 videos of Aidan..one of him practising for his year-end school concert which I'm pretty impressed with and another of him telling me a bedtime story :).