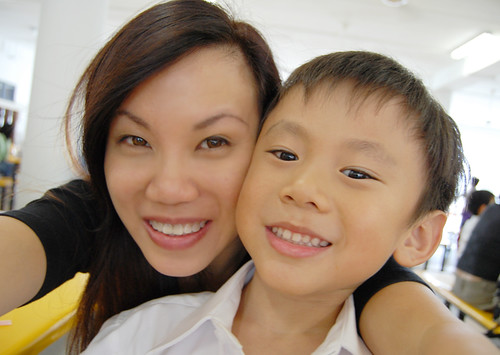 Some li' hiccups on his 2nd day of school. Nenita was there during recess time although she wasn't allowed to near the canteen (she called me up to give me updates). All the parents/caretaker were asked to standby at the lobby, which was a distance away from the canteen. As the P1 and P2 kids have their recess at the same time, it meant that there were about 500+ students in the canteen so it was difficult to find him amongst the crowd especially since the boy was so puny. It was only when recess was almost over that Aidan suddenly appeared in front of Nenita. She asked him whether he'd bought food during recess and he shook his head. He shoved his empty lunchbox (which was packed with biscuits and fruits and meant for his snack time at 11am) at her and said he had to go off to class. Oh man..it meant that he'd eaten his snack food instead of buying his own meal so he would have to go hungry during his snack time. Nenita also mentioned that his wallet seemed to be missing as she couldn't find it in his bag..Alamak! Faster than I thought!

So I decided to pick him up from school today during my lunchtime to see how he was faring. I was so amused when I saw him..He was no longer the prim looking boy that I'd sent to school in the morning. He was looking really unkempt with messy hair and his shirt all tucked out and seemed quite frazzled. He was holding some teeshirts in his hand. They were tees that we had to purchase for our child to be worn during special occasions. I quickly checked his bag to see if his wallet was there and voila..it was!! Strange. And in his bag was another 2 teeshirts. Hmm, so whose tees was he holding? Realised that the tees in his hand belonged to his classmate, Michael (the name was written on the plastic sheet) and Aidan had no idea why he was carrying them (!!!). So I had to go to the admin room to hand the tees back to the teacher. Asked him about his wallet and why it wasn't in his bag during recess. He said that his friends were playing with it because they thought it was a yoyo (!!) because I'd attached the spring-like thing to it so that it can be hooked to his belt or bag (to prevent it from being lost!). *Arghhhh*

The boy complained that he was really hungry - not surprising since he had no snacks so we had our lunch at the canteen and again, I let the boy purchase his own food and drink. While we were eating, I asked him whether he was enjoying school so far.

His reply.."I like primary school!!! The food here is very delicious!!!" 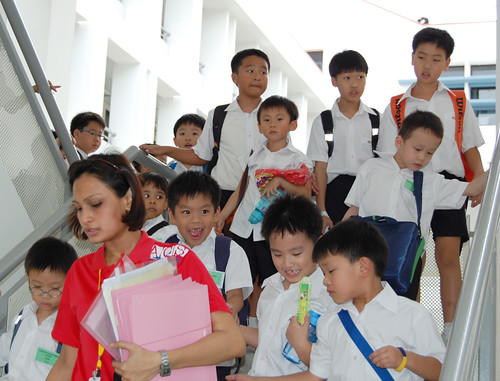 Boy walking down the stairs in a daze..note the tees in his hands which doesn't belong to him..
He could still tell me..Teacher says my size is 26 but these tees are size 32...!! 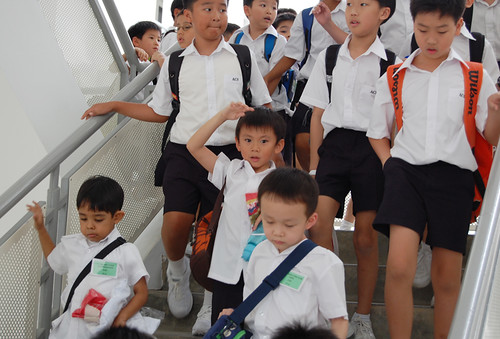 He finally spotted me :) 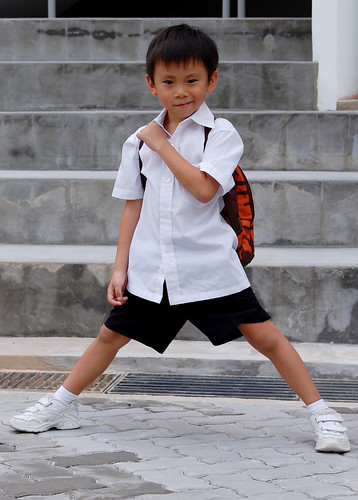 My samseng boy with his shirt all tucked out and looking so paikia-like! 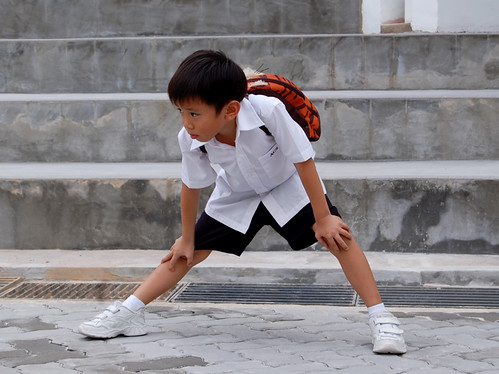 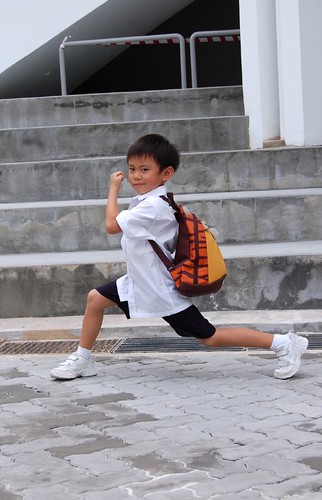 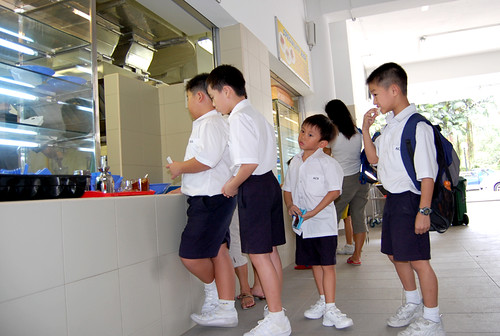 He looks so tiny sandwiched between the older boys! 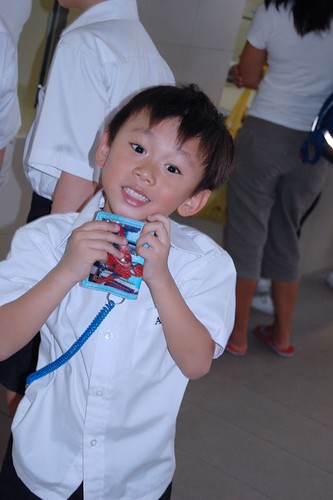 Showing off his 'almost lost' yoyo wallet to me! 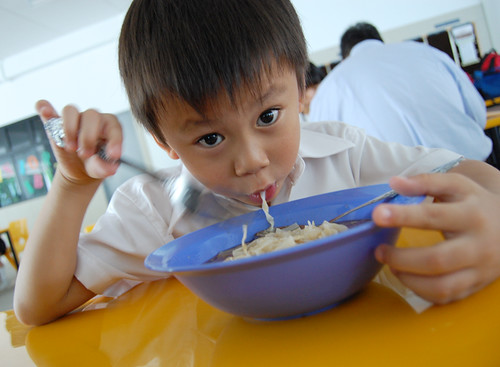 He was so hungry that he cleaned up his big plate of chicken horfun in a mere few minutes!! 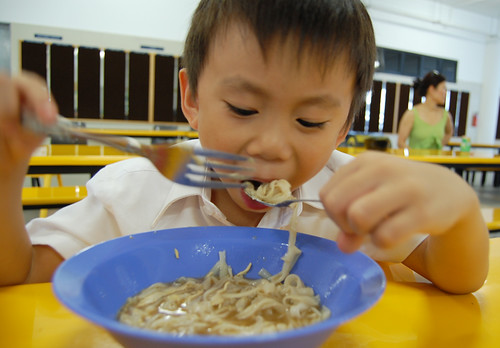 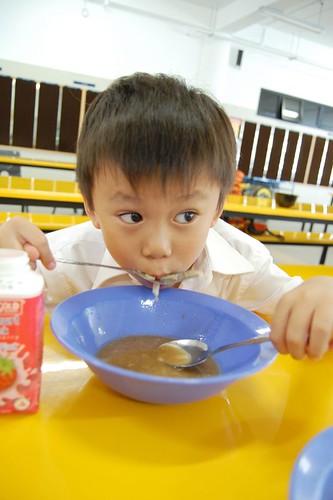 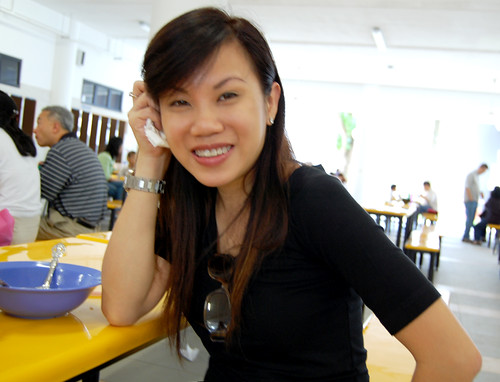 The boy insisted that he take a pic of me since I'd taken so many pics of him :)
So cheeky lah this boy!

Tomorrow is CCA day where the parents will decide which CCA to sign up our boys for. We are invited to go down to the school since there's an openhouse for the CCAs or we can opt to apply online. The list is very comprehensive. Check it out!
Sports / Games
Badminton
Cricket
Golf
Rugby
Sailing
Soccer
Squash
Swimming
Table Tennis
Tennis
Tenpin Bowling

Was thinking of signing him up for either golf or soccer! Haven't really made up my mind yet. He's open to both sports so I'll just wait till tomorrow to decide!

I know, I know..i sound so excited over his P1! Anyway, we are only allowed to see our kids during the first week! Will try not to be such a kiasu mommy and be so worried about him! I'm sure he would be fine!
Tags: acsj, aidan, primary one
Subscribe