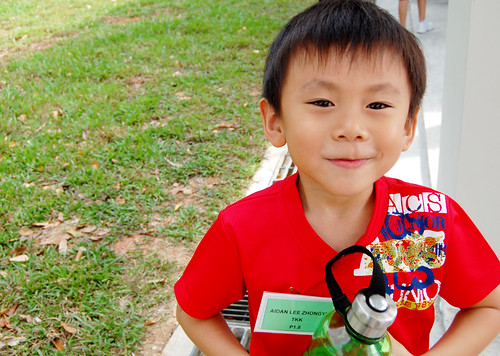 Man..I'm really glad that the weekdays are coming to an end and the weekends are just around the corner I AM EXHAUSTED!!!! I have no idea how parents with more than 1 school-going kid are able to cope! But all in all, it was an 'exciting' week for me and I really enjoyed myself seeing the li' boy in action at school and am relieved that he seems to be coping well so far. But then again, the real test would be when the schoolwork starts piling up!

The boy seemed to have aligned himself with the more active group. He has this good buddy, Ethan who is much taller and stockier than him but who seems to watch out for him too. And along with 2 other boys, they are constantly running around and playing amongst themselves..Most of the time, they will be at the back of the queue, joshing around. Parents are not permitted to enter the classrooms so I'm not able to see where the boy is seated but he told me that he's at the back of the class, which surprises me as the boy is not very tall. He told me Ethan is sitting right behind him so my guess is that the boys decided on their own seating arrangements. Am tempted to ask the teacher to move Aidan upfront because he's really active and if he remains behind, he'll probably won't be able to pay attention given his short attention span.

Have signed up for his CCA online. We were given 3 choices (only one will be selected) and I'd chosen 1)Golf 2) Soccer 3)Tennis. Will only know next week which sport he has been shortlisted for :) He seems fine during recess time too. In fact, I think he's having a great time 'coz he gets to pick his own food. I decided to give him $2.80 for pocket money and told him that he shouldn't try to spend them all and the remaining amount will go to his piggy bank which he can use to buy a toy by the end of the month. So far, he's has been putting some leftover coins into it. He told me he had wanton mee and an icecream on Thursday. I went down for a brief while during Recess today and spotted him finishing up a small bowl of kway teow soup. Stood at a distance to observe him (and take pictures) and after he'd dropped off the empty bowl at the clearing area, the boy proceeded to walk towards the stalls at the canteen..headed towards the Asian food stall and promptly ordered a bowl of udon!!!! Alamak! He was either hungry or greedy (he claimed to be the former). Oh well, his appetite has always been superb (that's why there's so many eating pics of him since young) so I'm not surprised that he finds the food insufficient. Oh well, I'll have to wait till the end of the day to see how much money is left.

Won't be going down to the school anymore from next week onwards. There are many parent volunteers around who are onhand to help out the li' ones and they will be there till end of Feb. He should be in good hands :) 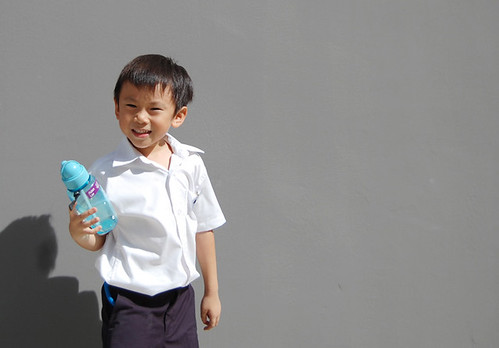 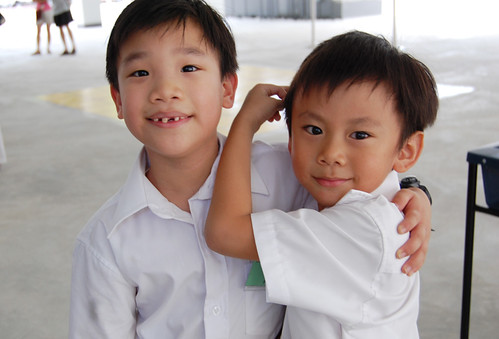 This is Ethan, his new goodfriend/classmate 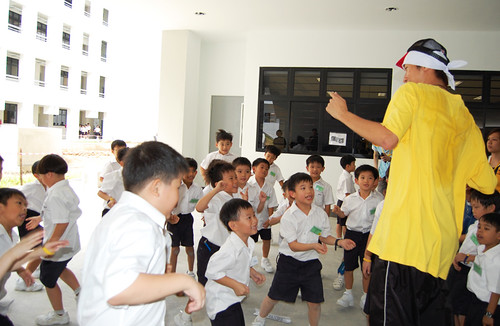 The boys got to check out the various CCA activities during the openhouse
Here's his class with the dance club instructor.. 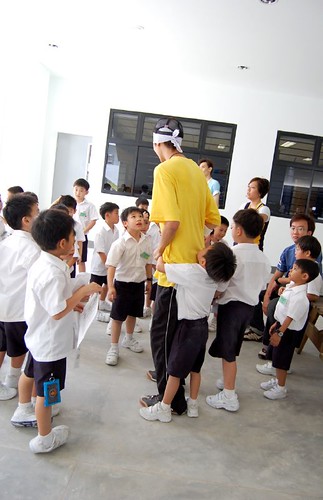 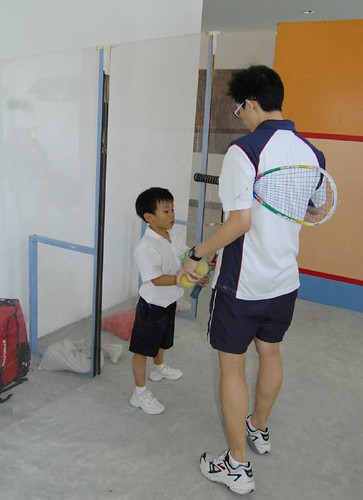 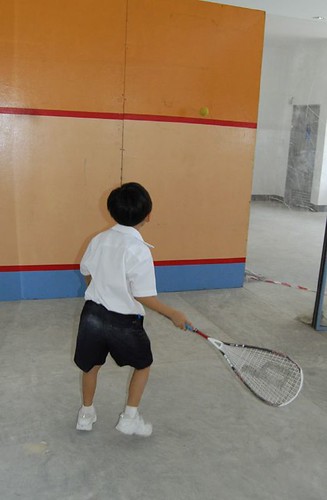 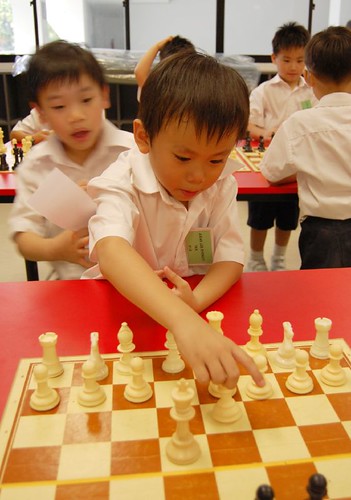 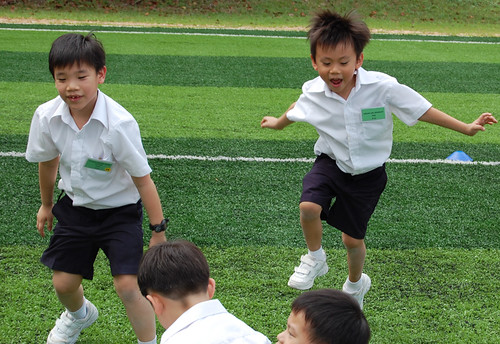 Running around at the football field.. 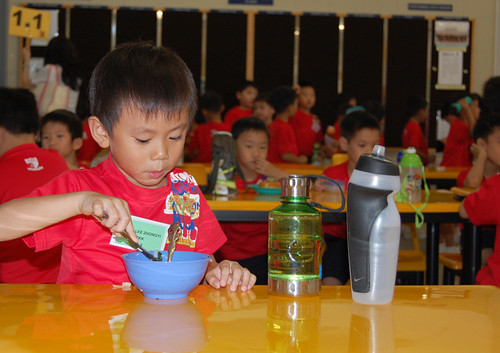 Here he was at the canteen finishing up his kway teow soup.. 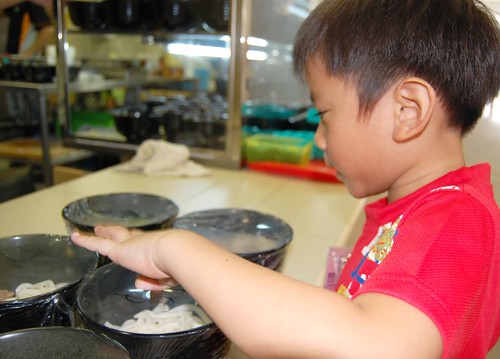 After that meal, he then decided to order a bowl of udon.. 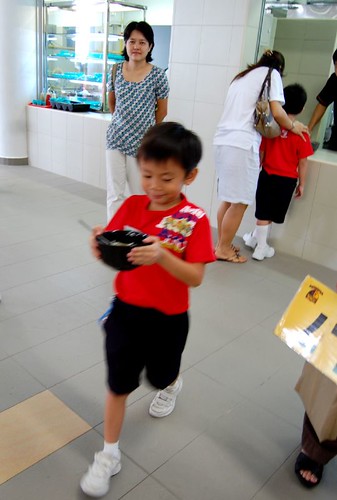 Walking back to his table happily.. 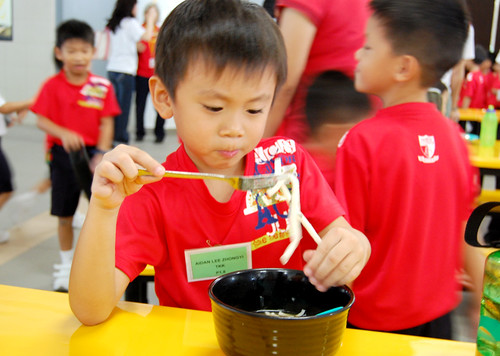 and proceeded to devour the entire bowl of noodles~ 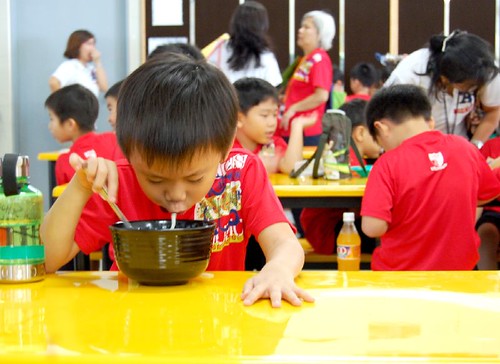 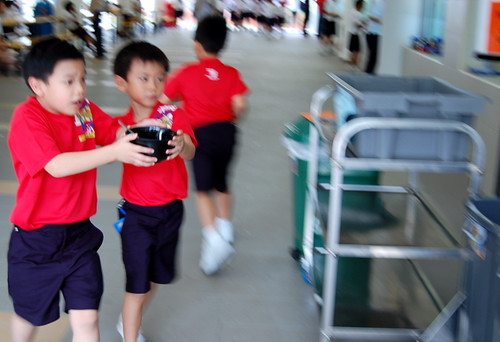 He was obviously the last boy to finish his meal since he had 2 bowls so the teacher was rushing him to quickly finish up.
Ethan was so sweet..He was helping Aidan to clear his bowl.. 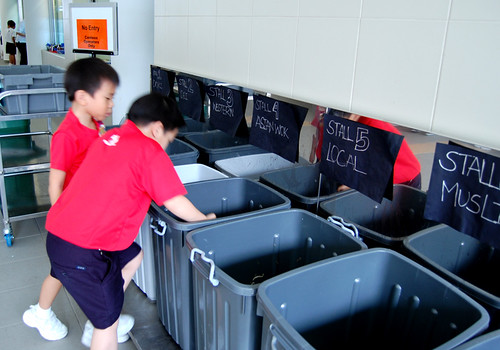 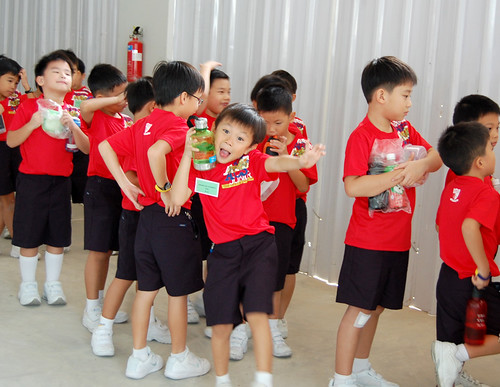 The boys lining up, preparing to head back to class.. 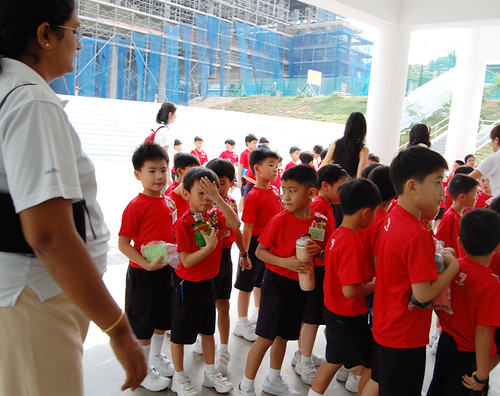