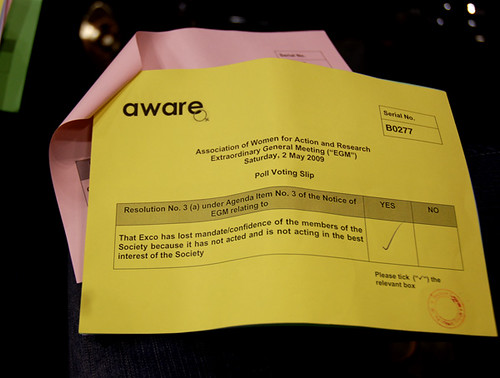 I have to admit..when the news of the takeover of Aware first broke, I didn't pay much heed to it. I'm generally quite passive about current affairs..But the newspaper coverage of it was intensive and so I dutily followed the saga through the reports. I also started asking my colleagues about how they felt about it. Most ..were like me, ambivalent. Some didn't even bother to read about it saying that it doesn't really concern them. Even though my stance was rather blasé initially, I still continued to follow the saga and on the night before the Aware EGOM, I don't know why but I just felt that it was the right thing to show up to cast my vote of no-confidence..I began to acknowledge that the series of happening has affected me somehow and that I shouldn't choose to remain bochap and remain apathetic. I guess I realised that if everyone had the same feelings as I had, then it will be really sad.

I won't write much about what happened because you can find most of it online (here and here) and in the papers.

Germaine have also blogged about the EOGM and their views of it. And I would also like to highly recommend this fair analysis by George Cherian, an assistant prof at NTU. I also want to add that I'm really glad I made the decision to be there (even though it was really last minute) and that my vote was amongst the 1414.

Some pics..(yeah, I always have pics..the one below was taken by my colleague Alvin though) 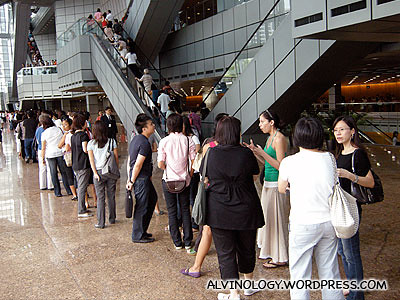 We were there early..Actually, I was the latest at 12.30 pm but the rest of them were already there much earlier (before noon) and there was already a long queue which stretched out all the way to the 3rd floor (the EOGM was on the 4th floor) 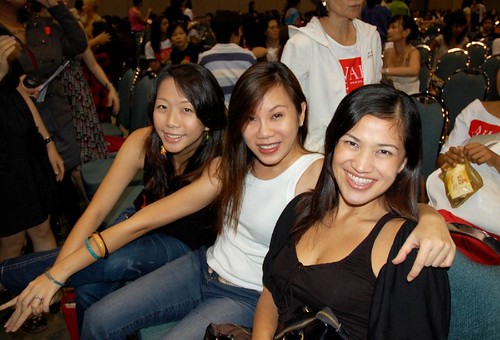 So while waiting for it to start, take peektures :P 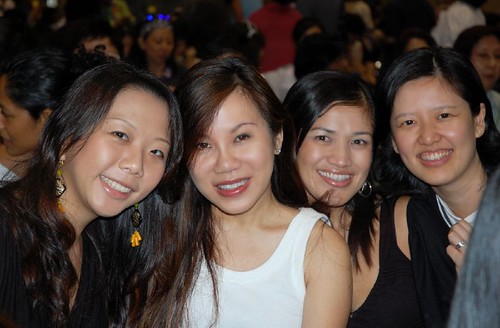 That's Tricia's friend, Youyen on the right. It was because of her (she came much earlier as she was one of the volunteers) that we could get seats pretty upfront.. 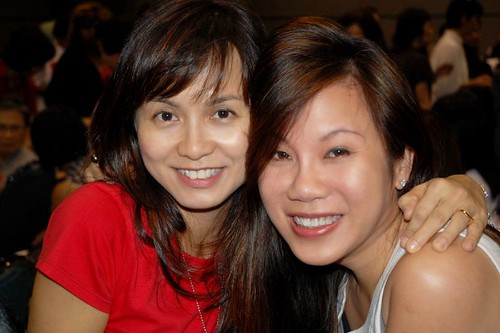 I met a uni-mate Adeline, whom I've not seen for more than 18 years...she still looks the same! 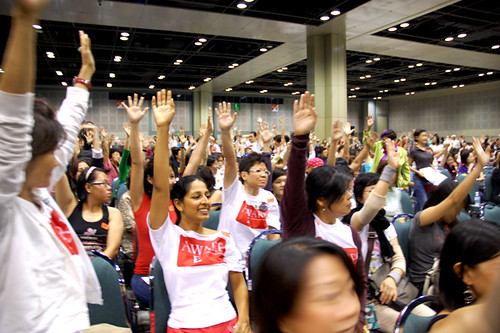 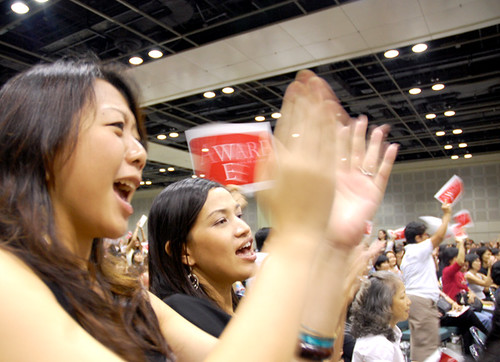 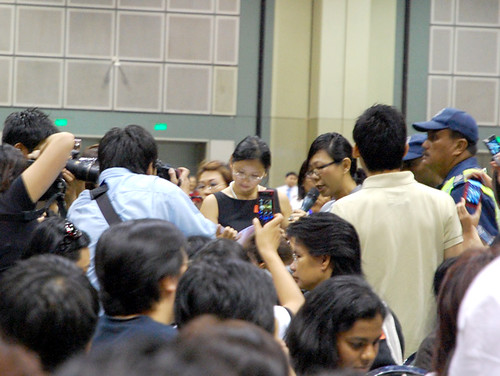 Irene Ang addressing the exco "...You say you have an open door for all women,but how to open your door when you change the locks to magnetic locks?You say you want to help retrenched women, and then the very next day you fire one..!!" 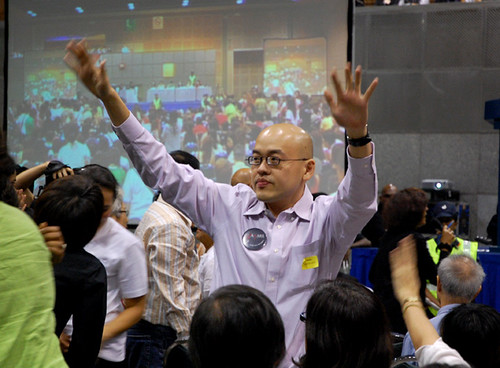 Legal counsel of the old guards, Siew Kum Hong asking the heated crowd to cool down... 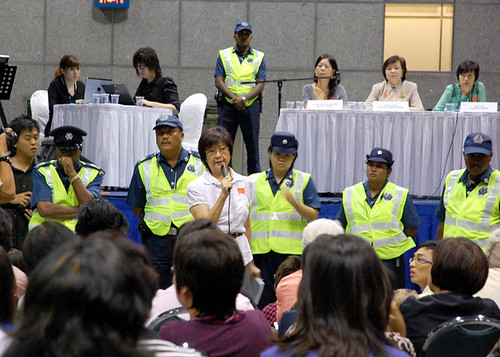 The very deluded Dr Thio Su Mien who was telling the crowd that she was deserving of the feminist mentor title especially because she was cited in a book that Aware had published in 1997 on the achievement of women in Singapore! "I'm on Page 73!" she said..After she said that, we all had this wtf look on our face. Check out the Aetos security guards surrounding her..if they weren't there, I'm sure she would have been lynched. 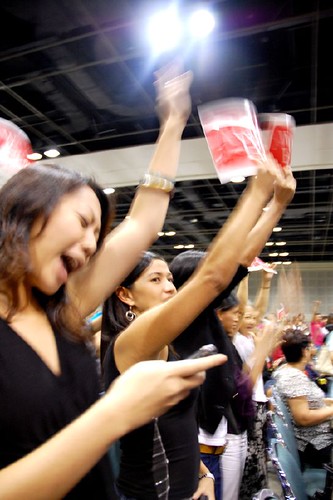 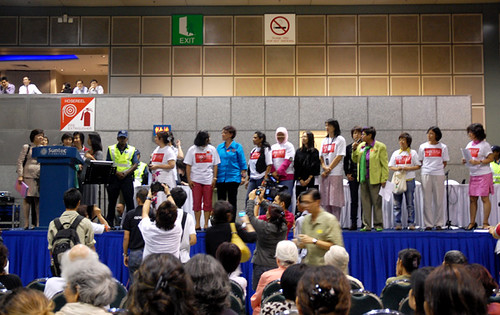 A tense moment when the (ex) new-exco returned and both factions were standing on the same stage.. 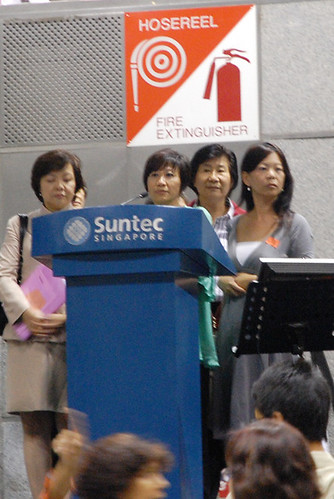 Josie Lau announcing on behalf of the exco that they were stepping down..
Okay..I may kena criticised for this but I really felt that Josie showed grace under fire. It wasn't easy being in her position, being jeered at and heckled non-stop and she remained composed throughout the proceedings..and even had to apologise on behalf of one of her exco members who asked someone to "Shut Up and Sit Down!" I'm sure u guys have seen the videos but nothing beats being there itself. It was an emotionally charged event and the supporters of the old guards were mostly very vocal about their feelings.
Here's the video of the "Shut Up & Sit Down" Incident... 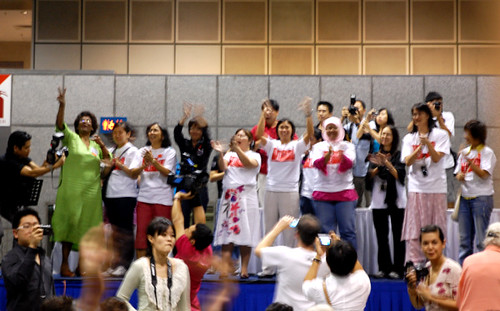 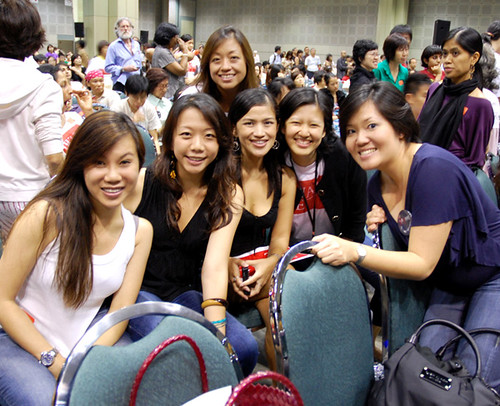 Whole group of us, very happy with the results..
And we were all extremely tired and hungry as we were there for almost 9 hours!

Heh..the wonders of the internet. When I returned home just at about 11pm that night, I saw several msn dialogue boxes open..most had found out via the same medium that I'd attended the EOGM..all the comments were like "I saw your mug on TOC homepage!". I have to admit,

Wei Chi's comment about it amused me. She wasn't sure whether that was me because she was wondering "Angie is the type that will attend Aware EGOM meh?" Alamak..
Tags: aware eogm
Subscribe